Nova Scotia – The Fundy Tides, Blomidon Beach and the Grand-Pre

On Sunday, we left at 9am for a day trip about an 11/2 hours away. The scenery was picturesque -farms and gardens and animals in the pastures. We made a coffee stop at the “Coffee Roasters Co-op”. It had a little museum on Fair Trade Coffee and all kinds of interesting information. Everyone said the coffee was good. I had tea and it was delicious! We drove on until we began seeing evidence of the flat lands. We saw several boats near the edge of the road just sitting in the mud flats. By about 4pm, they would be floating on the water. We stopped here and drove out on this partial road. You could see the beach in the far distance and trenches like holes in the ground where the water fills up. We made the trip in the morning because the tides would be out. 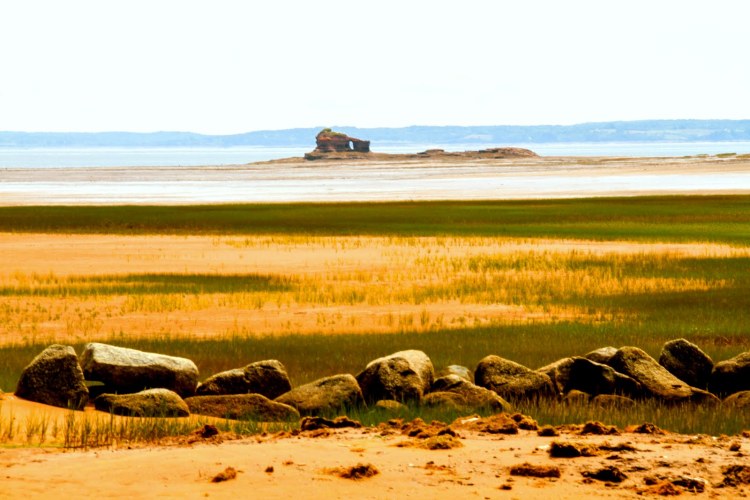 We finally arrived at the beach area. We had to walk down two sets of stairs and then there was the beach – huge reddish mud flats. The water seemed a mile away. I took many photos – I wanted to get the vastness of the mud flats and the billowy clouds in the sky.

Then I started walking toward the sea. It wasn’t long until my nice black sandals were ugly brown sandals. There were little streams of water that I had to jump over. Finally, I decided to turn back as I didn’t want to ruin my sandals and there was nothing to wipe off our feet nor any water to clean them back at the car. This is what I mean about organized! If the director knew this would happen, she should have said for us to use plastic bags or provided something to clean our feet or shoes. As it was, I went to the bathroom and cleaned my sandals with toilet paper. They still need to be cleaned with water. She told me before that I needed to wear sneakers (I had brand new ones) and wasn’t going to wear those. We all met at the car and from there went to look at a view of the whole area at a higher altitude.

It was about time for lunch so we went to a nearby town and ate at a restaurant called the ,”Tempest” – supposedly voted the 9th best restaurant in Nova Scotia. It was pretty good.  The ladies ordered mussels every time we had a meal.  They offered to share but the best part was the spicy sauce at the bottom of the bowl.

After lunch, we headed to the UNESCO Heritage Site called the Grand-Pre.  On the way, we saw a colorful field of day lilies .  We stopped and took a lot of pictures – some of the colors I had never seen before.  A man and his wife  asked me about my camera.  They asked my ideas about which Canon camera they should buy.  I gave them my opinion and they were very grateful for my advice.  My camera has been a great conversational opener.   On this trip I have met at least three people (mostly men) because of my camera.

We arrived at the Grand-Pre It was founded in the early 1680s by the Acadians and it was the largest Acadian settlement in the New World.  Sadly, in 1755 because of the French and Indian War – the governor issued the order to deport the Acadian population.  Almost everything they owned was turned over to the British Crown.  More than 6,000 Acadians were deported from Nova Scotia. The  Visitation Center is dedicated to the life of the Acadians.  There is a statue of Evangeline (from the poem by Longfellow), a memorial church, a duck pond, and several flower gardens.  When we arrived there was a concert, free food, demonstration crafts and for me – lots of opportunity to take photos. It was a beautiful location and I enjoyed walking around and listening to the lovely music.  We stayed there about an hour and a half.

When we left, we drove to a site where we could see across the bay to where we had been earlier.  There was a couple living close by in a cottage and they came out to talk with us.  The gentleman had old maps which showed what the area use to look like.  Looking across the water, you could see Blomidon Beach . There were groups of sand pipers that flocked together and flew over the water – when you looked at them it looked like one entity flying.  I got it in a photo but it was difficult to capture.

It was about 4pm and we were on our way back to the city.  I was so tired when we arrived that I opted to have dinner in my room.  I was also a bit sunburned so have to remember to keep using sunscreen lotion.  I also had a headache from listening to nonstop talking. The “I” word got a real workout.

I enjoyed my evening – figuring out how to upload my photos and getting them into Lightroom and writing my blog.