Peggy’s Cove and Lunenburg – on a Rainy Day

We headed out from Halifax toward Peggy’s Cove.  It was an overcast day with rain in the forecast.  We made a stop at a little town near Peggy’s Cove. It had lots of little shops and I enjoyed looking and actually buying a few Christmas gifts.  We continued on and finally reached Peggy’s Cove.  It is a charming area with a rugged coastline and unique geology.  It is a working community – fishermen’s boats, nets and traps make it clear that it’s way of life endures. The weather was looking more threatening so I put on my raincoat and took out my umbrella.  We proceeded along the road encountering photographic moments around every corner.

Inlets with dories and  little houses, weather-beaten shacks, flowers dotted the landscape.  We stopped at a coffee shop and I had hot chocolate. After that I wondered around enjoying the picture taking opportunities.

The other ladies made their way to the lighthouse.  I headed that way but was so involved with  the charming scenery, that I soon lost sight of them.  Then as the lighthouse was in sight ,  the downpour began in earnest.  I took two quick photos and turned around to go back. So glad I had my umbrella – I returned to near where the car was parked and waited in the visitor’s center for the others.  It was 30 minutes later and they straggled back looking a bit soaked. We got into the car and the director  pulled the car to a scenic spot.  She had  brought some things for a picnic lunch so we sat in the car and ate and looked  out at the breaking of the waves upon the shore.  Two of the women sat on a bench outside in the cold and ate but I was happy to sit in the car.  There was a seagull sitting near the women hoping for a handout – I don’t think he got a bite of their lobster rolls.

Once again we were driving and making our way to Lunenburg.  We would stay in Lunenburg for 3 nights and do things in and around that community.  Lunenburg is a UNESCO Heritage Site and now it was the site of the tall ships.  So 8 of them were all down at the harbor.  It was going to be another week of Tall Boat celebration with all kinds of local activities.  We finally arrived at our hotel /B&B and checked in.  I was very surprised when I walked into my room and saw a suite.  I took some photos before I started messing it up with my things.  There was a nice sitting room with two chairs and a desk – plenty of room and more.  My bathroom had a claw foot tub – made into a shower – personally a bit dangerous getting in and out.  The room was nice with all the amenities. I just figured everyone’s room was the same.

I found out later that one lady had a single room with a very tiny bathroom.  She was not too happy with her room.  I don’t blame her.  I would have been furious!  The other lady had a single room but it was bigger that the other single room.  Their rooms were right across from each other.  Mine was a corner room.  Later, on the last night – the director asked what we liked and didn’t like about the tour ( I felt it was inappropriate to ask that – she should of asked us to fill out an evaluation form.) Anyway, the one woman said she was upset about her room.  So the director went into a long explanation why she chose me.  She said I had come the furtherest and that I needed a place to do my photos.  She thought since the other two were friends that they should be across from each other.  I don’t think her answer satisfied the ladies – but we moved on to other things.

We were on our own for the afternoon and I was very happy to go out and about and eat dinner by myself.  I was hungry as I hadn’t had much lunch so I found a cafe and had a bite to eat.  I don’t know how this restaurant  stays in business because the food was mediocre at best.  It was still wet from the rain but most of it had tapered off.  It was nice just wandering around.  I went down to the harbor and saw the tall ships but it was the same sort of thing in Halifax so I had been there done that sort of feeling.  Lots of restored homes and little parks and tons of shops for the tourist.  There are quite a few restaurants and we ate in a some of them during our stay. 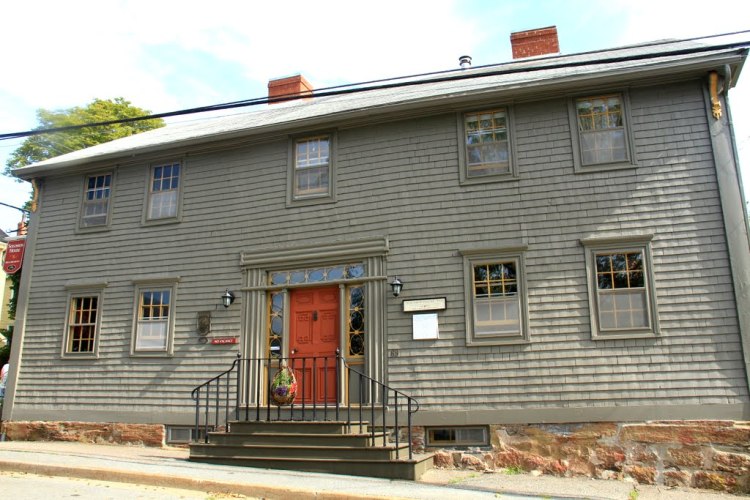 That evening we were to meet the director at our hotel and we would go to the Fisherman’s Museum to see a local show called, “Glimpses’.  It told the history of the town in story and song with local actors.  It was very good and a very lively production.  It was probably one of the best parts of our stay there. Afterwards, I left with the lady from Boston to return back to our hotel and the director and other lady went to the pub.  There was suppose to be a sing-along put on by the members of the play.  We were told later that it wasn’t that great.  So that was the end of our first day in Lunenburg.