On The Way To Ibera

We managed to get our act together so that we could meet Sergio at 9am and leave on time. We had to drive at least 41/2 hours to get to Posadas where we would stay the night. Then we would be met there by another driver who would take us to the Reserve at Ibera. This was another drive of about 5 or 6 hours. Sergio was very informative and told us a lot about the area we were going through – The province was called Missiones and Posadas was the capital city. Iguazu Falls is the main draw of the province.

We made many photo stops along the way. The weather was overcast when we started out but gradually the sun began to shine and it turned out to be a lovely day. It was a Sunday so not a lot of traffic. Sergio told us about this tree called the La Pachoe tree. Depending on the season, you can see the tree with three different colors of blossoms. We saw all three colors as we drove along. Hopefully, you will see the tree and its different blossoms in my photo album. Barbara had to use the restroom at least twice along the way. One time we stopped at a gasoline station and when Barb went in there was an extremely long line. When she came back and told us – we then noticed a tour bus across the street. We had to go back a ways to find another gasoline station. Unfortunately, it wasn’t very clean. I am glad I didn’t have to go. I was smart enough to carry toilet paper in my bag which came in handy at the various stops we did make. 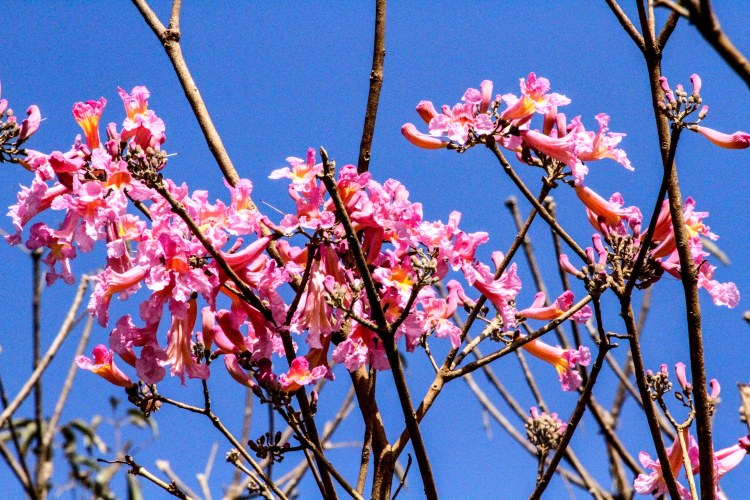 One time we stopped to look at a roadside market. The owner was a young man with a lot of personality. I ended up buying a jar of pickled vegetables. Barb bought a jar of sweet mangos.

We also saw some local Indians selling things at the side of the road. We stopped and I got a very nice photo of the woman and her children. I didn’t buy anything. I think she was selling plants. I did give her some money, though for allowing us to take her picture.

It seemed to take forever to get to Posadas but I guess that is because we took so many photos. We finally arrived but it took a while to find the hotel. There wasn’t a lot of choice in hotels but the agent said we were staying in the best one. The driver finally found the right hotel. We said good by to Sergio and the driver. I got Sergio’s e-mail and promised to send him my album.

Our room wasn’t ready yet so we went to get something to eat. We hadn’t eaten since breakfast and it was around 2:30pm. There was a cafe so we went to see what they had. It took a while to find the waiter but he eventually came and took our order. I don’t recall what we ate. Being a vegetarian in a “meat” society was a challenge. I had to go to eating dairy – cheese and also fish to survive. The staples seem to be steak, pizza, ham, cheese and vegetables – eggplant, squash, coffee, mata (which is a special tea made from special mata leaves. You drink it out of a gourd-like cup with a silver straw. Every country has their own method of growing and preparing the leaves. I think I took one taste and it was very bitter. Evidently, it is a pick-me-up and energy type of drink). We saw lots of people walking around with their mata cups. Anyway, I do remember a cappuccino I had there. It was made with coffee and chocolate and was delicious!

Our room was finally ready. It was ok – nothing special but it had plenty of room to move about. Now a few words about the electrical situation – I did discuss the electrical problems we might face in Argentina with Barb but she didn’t remember and didn’t bring any plugs. Luckily, I had my transformer and three plugs. Everything I read said they used three prong plugs like Australia as well as some European type plugs. What really helped me was that computers, iPads and digital camera chargers could be plugged into 220 voltage. I also had my hair dryer and curling iron that was dual voltage. All I really needed was the correct plug. One that I had worked well with all my electrical goods. I gave my transformer to Barb and one of the plugs so she was able to use her electrical items. I let her hook up in the bathroom most of the time as I could make do in the room as long as there was an outlet by a mirror. It actually worked out pretty well for both of us as we could get ready at the same time. Barb needed a lot more time than I did. I guess being a flight attendant helped me to get it all together in less than 45 minutes. I was proud of Barbara because she does have an issue with being on time and getting ready quickly so for the most part she did really well!

We didn’t unpack much but it had been a long day so we spent a few hours resting. I think Barb fell asleep. It was getting late so I was hoping to just skip dinner. It was really cold outside now. At 9pm, Barb decided she wanted to go out so I said ok and I looked on the internet for a restaurant. It was Sunday evening so we weren’t sure what would be open. We had to go several blocks to find one restaurant and it was closed. We went to another hotel and decided to go to their restaurant. It was kind of a weird place. It had one waiter. We finally got waited on but everything we wanted they didn’t have. Then the waiter left and he didn’t come back. We looked around and noticed no one had their food. We decided to leave. Once more we looked for some place to eat and found a cafe which was filled with a lot of people. Lots of people usually indicate good food so we went in and were told to sit any place. We got menus and discovered that almost everything on the menu included ham and cheese. I am not kidding, every food description added ham and cheese. I decided I wanted a cup of herbal tea and that was it! Barb ordered a side of mashed potatoes and fruit. I think her fruit was canned. We had a good laugh over the menu. We walked back to the hotel and asked for a wake-up call. Our itinerary said the driver would arrive to pick us up around 9am so I wanted to be all ready to go.