Today was the actual first day of our tour. Shawn and I got up early to meet the group for breakfast.  We got there at 7:30 am and were surprised that most of the group were already having breakfast. I asked someone who our guide was and went to introduce myself.  He was not the most personable person but seemed nice enough.His name was Eric and I found out from others that he was a librarian and had been doing these tours for 14 years. We also discovered that he was not a professional photographer but just did it for a hobby. That was a bit disappointing. He said we had to be ready by 8:30 am to get on the bus.  We didn’t really meet anyone else except a lady named Dee from Florida the day before.  We had hoped to keep our room and check out at 12pm. but were told we would not be back until 1pm. So we had to check out early. The program book had said we would be going to the Blue Lagoon and then eating lunch and then do some sightseeing treks after an orientation meeting. Shawn and I decided to wear our swim outfits under our clothes.  I think the majority of the group thought we were going to the Blue Lagoon first but when we got into the bus, the guide said we were going to see the lighthouse at Grindavik and the rugged coastline of the Atlantic Ocean. Some of the group had to get into their luggage and get their cameras. Because of the confusion, we got off to a late start.

So our first stop was along the coast of the Atlantic Ocean that had  fantastic rock formations.  There was also a memorial statue of the Auk which is an extinct bird that once inhabited the shores of Iceland.  We stayed there quite a while and then went on to Grindavik to see another geothermal plant and the lighthouse.  Just as we arrived, the sun finally came out.  There were a lot of wild flowers and it was fun taking macro photos. 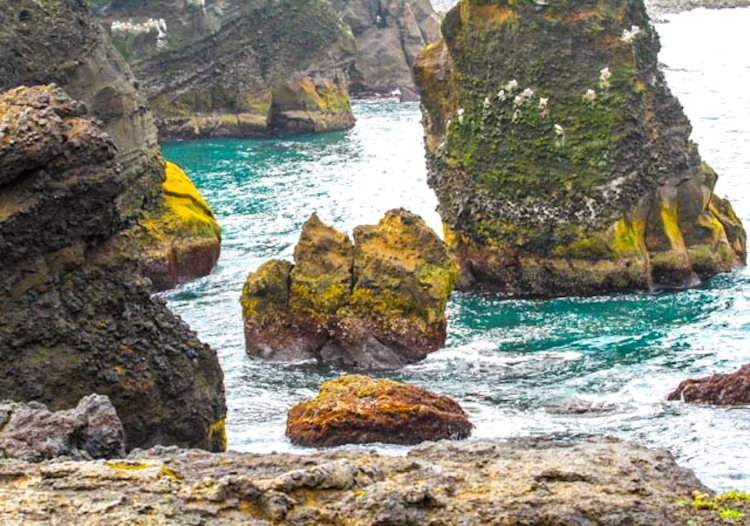 Finally, we were off to the Blue Lagoon.  When we arrived there was a huge line.  The rain had finally stopped and the sun was out so I guess a lot of people were also out to enjoy the lagoon.  The lagoon has a blue caste to it and is chalky white in color as it is filled with minerals.  It is suppose to be good for any kind of skin conditions and arthritis. It was kind of chaotic because no one knew what to do and our guide had gone to help one of the ladies find the spa area.  One of the attendants talked to the group to tell us what to do.  We had to have a wrist band with a sensor on it that opened the locker.  If you lost it, they charged you.  One of the ladies in our group lost hers but found it in the shower.  We already had our towels.  So all the women in the group went upstairs to the dressing room. We had to take off our shoes before we went into the dressing room. It was soooo crowded and no available lockers. We just had to wait around until someone left.  I waited behind a lady getting dressed and got her locker.  I kept trying to shut the door with the sensor bracelet and it kept opening. I finally got it to stay closed. We were supposed to take a shower first with nothing on and then put our suits on, but none of us did that.  We just showered with our suit and went down the stairs to the lagoon. Shawn said that there were attendants in his shower and everyone had to shower first with nothing on.  Icelandic people are like the Swedes – very comfortable running around without their clothes. I met Shawn who was already in the water.  You weren’t suppose to put your hair in the water as it made it very dry.  Basically, it was a bunch of people standing in water – talking or just relaxing.  You will see what I mean in the photo. We only stayed about 15 minutes because we used up most of our time waiting for a locker.  By the time we went back to shower and dress, it had pretty much cleared out.  It was an experience but I am not sure if it was worth it. I did get a chance to take photos from the restaurant roof before we left.  I think we did spend a lot of time just waiting around for everyone.  Evidently, one couple was late arriving and had spent the whole morning waiting for us at the lagoon. 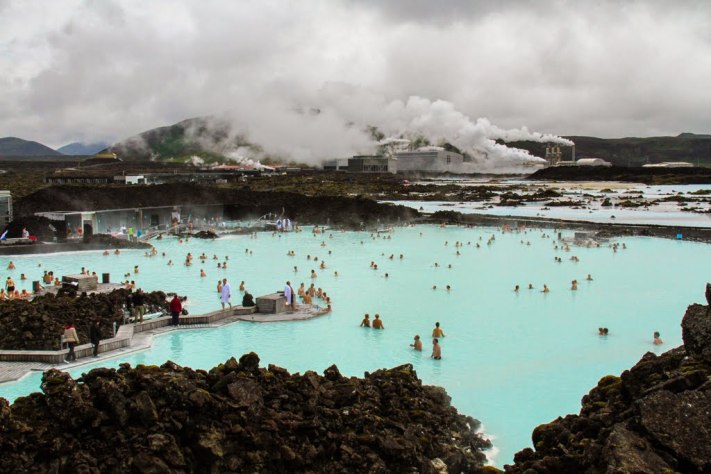 We returned to the hotel and had lunch.  It was a very sparse lunch with a bowl of saffron seafood soup, bread and a Pavlova for dessert.  So far all the desserts come with cream and the first day I had a bite of it and did not feel well.  After that, I learned to skip the cream and any dairy products.  They only offer whole milk and no nondairy products.  After lunch, the guide – Eric gave us a talk about the itinerary and said he might change things up according to the weather and any other unforeseeable conditions. We had a van and a driver.  Unfortunately, we all thought the van way to small for 20 people.  And that was another thing, they said it would be a small group of 12, and we ended up with 20 people. That first day, we were in the back and it was very hot. We also had several really big talkers who talked every minute of the trip, even when the guide was trying to talk.  So that was a bit annoying.

Just a few words about the group.  There is a wide range of photography ability in the group.  Some seem very technically proficient, others are just beginning and then some are average (like Shawn and myself).  I discovered that we came the furtherest of anyone.  There is one guy from Los Angeles.  I have learned almost everyone’s name.  There are quite a few single women – widowed or divorced, several couples, a few married men on their own, a married lady on her own and Shawn and I are the only mother and son.  Shawn is the youngest.

Everyone seems fairly compatible.  There are several ladies who are very loud and constantly asking unnecessary questions.  Then you have the few people who are chronically late every time. After sitting in the back, the first day we decided we would get up early to be sure we would have a seat in front. Lots of people are very well traveled especially the girl from New York who has made known that she has been every where at least 2 or 3 times!

The last stop was where the tectonic plates appear above ground.  These are ridges which is very unusual since all the rest of the plates are on the bottom of the ocean floor. In Iceland it’s sitting right at the surface. You can see the North American Plate on one side and the Eurasian plate on the other.

We went on to the Hotel Borgarnes.  The hotel was all right.  The room was very small with a teeny tiny bathroom. We met for dinner at 7pm. Everyone had pork and I had strange deep fried potatoes and vegetable pattie.  Shawn and I had beer and wine which was rather expensive.  Beer is around $9.00 and wine is about $10 or $11 dollars.  We went to our room right afterwards.  We wanted to get up early to take a walk around the town before breakfast.  It had been an exhausting but interesting day and we were looking forward to the next day.