Our hotel was the ION Luxury Adventure Hotel.  From the outside, it is hard to believe it is a hotel.  It overlooks a lake but for the most part the area is desolate even though it is just 11 miles from the UNESCO Heritage site of Pingvellir National Park. That night we had our dinner in a private room.  The main course was salmon. I noticed that many of the fish dishes that I had in Iceland were prepared usually in a cream sauce and very lightly cooked.  The meal was rather unusual as there was only one person doing the serving for 22 people.   We spent quite a long time waiting between courses.  Although, it was an elegant set-up, the food and service left a lot to be desired.

One thing that we all noticed was that the service industry was not keeping up with tourist demand..  The guide seemed to feel that not enough is being done to train the people who work in the tourist industry.  The large influx of tourists in the last few years has been overwhelming and the country has not been able to keep up. We didn’t find the waiters and waitresses very friendly and some even hostile if you ask for anything different.  I remember at one hotel there was a buffet and I asked for oil and vinegar.  There was balsamic vinegar but no oil so I asked for olive oil and the waitress insisted that the vinegar was oil.  I told her that I was pretty sure that it was not oil but she was going to prove it to me by bringing in the carton.  She did come back a few minutes later with the olive oil and half heartedly apologized for arguing with me.

The next morning we drove to the Geyser geothermal area and Gulfoss, the Golden Waterfall”.  Our first stop was the Pingvellir National Park. Þingvellir is a site of historical, cultural, and geological importance and is one of the most popular tourist destinations in Iceland. It is the site of the rift valley that marks the crest of the mid-Atlantic Ridge. It is also home to Pingvallavath, the largest natural lake in Iceland.  That day was very cold and very windy.  We started off at the top of the ridge where we could look at the view.  It was so windy and cold; I was doubtful about going.  Some people stayed on the bus.  I hated to miss out on anything so I decided to go.  As the guide did not really explain what this area was and what we were doing, I wasn’t sure about the excursion. Shawn and I began the walk and then we realized it was a walk through the rift valley with beautiful views and a meandering river that followed the ridge path. As we walked between the huge rocks, we were happy to discover that  the wind was blocked and it was not as cold as it was on the top. Here are some of the photos I took along the way.

It was a beautiful walk with lovely views.  At the end of the path our bus was waiting for us.  Much to the dismay of everyone, we were missing one person. Our guide got out to look for Dave, and meanwhile the rest of us went on to the shop area and restrooms and then we would have to return to pick up the guide and Dave.  This was one of the downsides of traveling with a group.  There were always a few who didn’t pay attention to the time and we spent a lot of time waiting for them.  I am happy to say that Shawn and I were always on time no matter the circumstances.

Finally after the shop and restroom stop and returning for the guide and Dave, we were on our way to lunch. It was windy and cold and raining off and on and we were all hungry.  The restaurant was located in a really neat area where we were all excited about the photography opportunities.  Lunch was not too exciting – a meager salad bar, bread  and soup.  They were making a potato soup so I waited for the vegetarian option.  Meanwhile everyone was eating and then going outside to take photos.  On one side of the restaurant you could look down through the windows and see the cows.  Several people went down to get a more up close and personal look and got in trouble for going into the barn without the proper clothing and covered shoes. Shawn and I had a great time outside taking photos.  I wish we could have gone to more local places like this one. 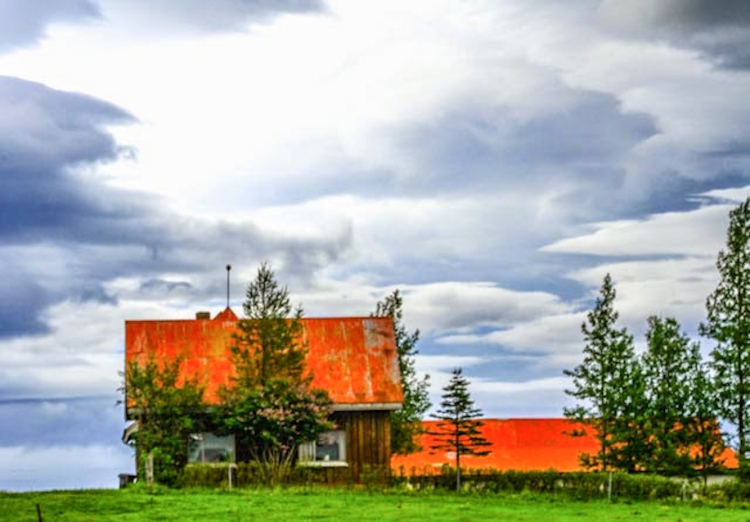 From here, we continued driving to Gulfoss, the “Golden Waterfall”.  As spectacular as they all were, I was happy to learn that this was the last waterfall we would see.  It was a lovely area but we didn’t have time to get close to the waterfall..  It was a very commercial area for tourists.

This was our final stop before heading back to Reykjavik, the capital.  I think by this time everyone was happy to be wrapping up the tour.  We were all looking forward to two days at the same hotel and a chance to explore on our own.