I was happy to see my tour guide when I went downstairs to the hotel reception area.  She said that we were going for a ride on Bolivia’s air transport – cable car system.  It was dreary and cloudy but not yet raining.  I guess I will be taking my rain coat and umbrella where ever I go.  It was a fun ride but difficult to take photos.  It really isn’t a tourist ride but more for the local people to get from one part of the city to another.  Three teenagers were fooling with their cell phones and then there was a couple with a baby and a young boy.  Here are some of the photos I took of the city. 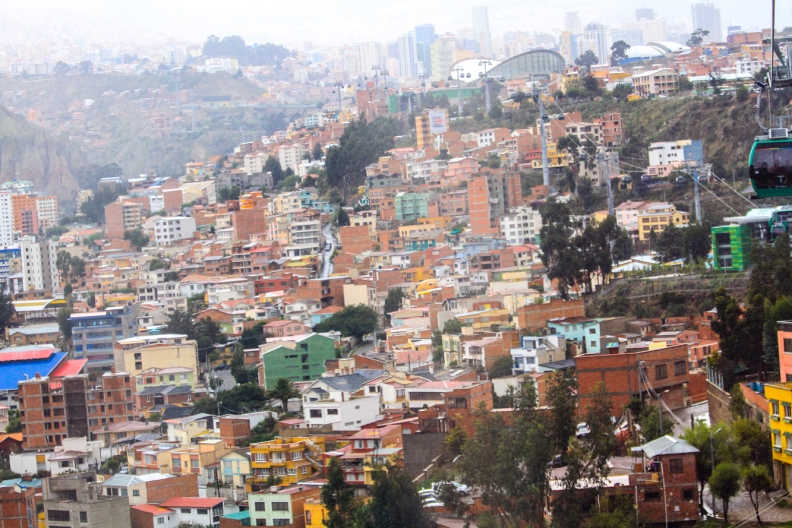 “La Paz, the city that touches the sky, is located high above sea level. La Paz sits in a bowl surrounded by the high altiplano.  As the city grows, it climbs the hills resulting in varying elevations from 3000 to 4100 m. Overlooking the city is towering triple-peaked Illimani (the highest mountain in the Bolivian Andes Mountain Range), always snow covered and majestic.” I found this very apt description of La Paz and it means even more once you have skimmed across the top of the city  in a cable car.

Our ride ended all too soon but while we waited for our driver I did get a some photos of the indigenous people. Indigenous peoples in Bolivia, or Native Bolivians, are Bolivian people who are of indigenous ancestry. They constitute approximately 62% of Bolivia’s population of 10,461,053 and belong to 36 recognized ethnic groups. Quechua and Aymara are the largest groups. My guide comes from the Aymara group.  Although, most of the people are Catholic, many still believe in the old religion of Mother Earth.  Some of the older people will not allow you to take photos as they believe it steals the spirit.  You have to be sneaky to get some shots.  There are also a lot of set ups where you take a photo and they demand money.

Here are a few photos I took while we were waiting for the driver.

We finally found the driver and from there we went to Moon Valley  National Park.  It is made up of unique natural geological formations.  It got its name from Neil Armstrong. When he was visiting the area, he said it looked like the moon so consequently, they named it Moon Valley.  It was very interesting but a lot of stairs and climbing – needless to say we took the short walk.  While we were there, we were inundated with a Japanese tour but we managed to go our own way.