After our sojourn into the Uyuni Salt Flats, we made the long trek back to the town of Uyuni.  It was New Year’s Eve but I was too tired to do anything but repack for the next morning and go to bed!  I don’t think I even ate dinner.  I had talked about seeing the salt flats at sunset but when Paula mentioned about returning for the sunset, I said, “no way”!   As I had mentioned before – the hotel wasn’t the greatest and the room was less than adequate. I had to go to ask the person at the reception desk to figure out how to turn on the lights – the switch was behind the bed board.  No place to put anything in the bathroom and teeny tiny lights that didn’t give light.  I went to bed but was awakened around 2 pm with fire cracker noise. Fortunately, that is all I heard and went back to sleep. I got up early and went to eat breakfast – tea and a piece of fruit.  Not much there to eat.  I did meet a nice young couple – both doctors from Brazil.  They were going to the salt flats and were asking me about my trip.  It was time for me to leave so I checked out and waited for Paula – who came right on time.

Dancing in the Desert

We stopped at the San Cristobal village – “In 1998, the company met with the community of San Cristobal to relocate the town safely away from the location where mining operations were about to start.  A major part of the agreement was to carefully transport the church and the cemetery.  Moving the church was a significant undertaking; the company invested more than US $400,000 to ensure that the move occurred safely and without incident.”  The owner of the company then was Apex Mining out of Denver, Colorado.  It is owned now by a Japanese Mining company.

Unfortunately, I couldn’t get the photo as it was New Year’s Day and the people were celebrating with music and dance in front of the church.  I did get the photo on the way back from the desert excursion. So I have included it now.

We drove on further until we came to Alota, another small desert village.  Shortly after that,we stopped and had lunch.  I hadn’t realized when they said “lunch included” on the itinerary, that it meant a picnic lunch in the desert.  So here we are in the middle of nowhere (to me) and the driver and guide are setting up our lunch.  There was a stream close by where we discovered Andean geese and their babies.

Paula had ordered vegetarian food for us from Uyuni but although some of the food was vegetarian – there was a piece of steak on top of everything.  It didn’t bother me but I guess it made Paula upset.  She doesn’t eat beef at all. There was quinoa and vegetables and a wonderful desert and it was delicious! I didn’t have to do a thing!!! It was a lovely experience and I thoroughly enjoyed the company and the setting!

Now we were on our way through Rock Valley famous for its unique rock formations.  I think you had to use your imagination quite a bit to see animals or objects in the formations but we did come across the “condor”.

We came upon the Black Lagoon.  The lagoon was very low and one end was filled with algae.  Probably more interesting was the green plant that looked like moss but wasn’t, found close by and is protected by the government. It was used as fuel for fires by the Indigenous people until it started to become extinct. 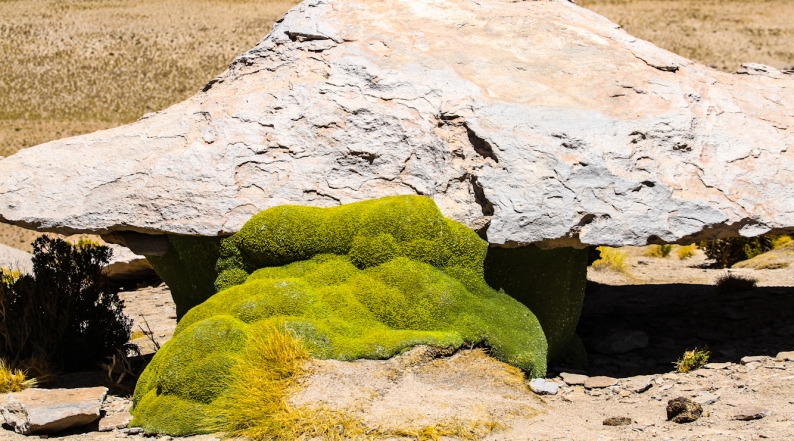 “Yareta also known as “Llareta” in Spanish, is a flowering plant in the family Apiaceae native to South America. It grows in the Puna grasslands of the Andes in Peru, Bolivia, northern Chile, and western Argentina at altitudes between 3,200 and 4,500 metres (10,500 and 14,800 ft)  Yareta is well-adapted to high insolation rates typical of the Andes highlands and cannot grow in shade. The plant’s leaves grow into an extremely compact, dense mat that reduces heat loss. This mat grows near the ground where air temperature is higher than the mean air temperature.

Set in the backdrop of snow-covered mountains, the lagoon, like its neighbors, is famous for a variety of high Andean waterfowl, particularly flamingos (mostly white for the reason that algae that creates the pink color is comparatively less in the lake waters, and other bird species such as ducks and the Andean goose, and herds of vicuña are also reported. The name is derived from the sulphur smell that permeates the area.

It was late afternoon when we arrived at the Desert Hotel – Tayka (often called Ojo de Perdiz – eye of the Pigeon).  The setting for this hotel is probably the most dramatic in Bolivia and it is really this location, amid the high Andean desert landscape, rather than the property itself that is so inspiring.  The small hotel may just be the most remote accommodation on the continent and there is nothing anywhere within a vast distance of this place.  Built as a community project by four local families, with a capacity for 47 guests in basic but comfortable rooms, the simple hotel is very much in tune with its environment, blending into a stunning landscape – the impressive Siloli Desert expanse with its towering mountains in the background.   Because there is virtually nothing else for miles – I had full board.  My room was basic and I had to move things around to my satisfaction but it was better than the last hotel in Uyuni.  The dining room was lovely and the driver, Paula and I had a delightful dinner.  This was the highest altitude yet so I had oxygen before I went to bed.  I did wake up at one time but was able to go back to sleep.  I was suppose to meet Paula for breakfast at 6:30am as we had made a wake-up call for 5:30am.  Thank goodness I had repacked earlier because the only knock I heard was at 6:30am.  I rushed to get my act together.  Finally, Paula came to my door to see what happened to me.   I had a quick breakfast of tea and toast and then we were once more on our way venturing out to explore the remote and beautiful desert.