On The Way To Victor, Idaho

We spent our last morning at the Elk Refuge Inn gathering our belongings and loading the car.  We headed toward Victor (we thought) on the highway going the wrong direction.  We finally figured out that we needed to head back into Jackson Hole to get on the right highway going to Victor.  In the meantime, we stopped and took a few more Grand Teton mountain photos.  The sun was shining through the darkening clouds on the mountain tops and it was a beautiful sight!

After deciding we were going the wrong direction, we went back to Jackson Hole and thought we might as well have breakfast.  We stopped at a place called Bubbas – a barbecue restaurant that served breakfast.  We asked the waitress about Victor and she told us which road to take and told us we had to go over the mountain pass to get there. She mentioned that a lot of people live in Victor and come over the pass every day to work in Jackson Hole.  We finished breakfast and got on our way.  As we climbed higher and higher, we saw rain clouds in the distance and behind us.  We stopped to take a few photos looking back toward Jackson Hole. 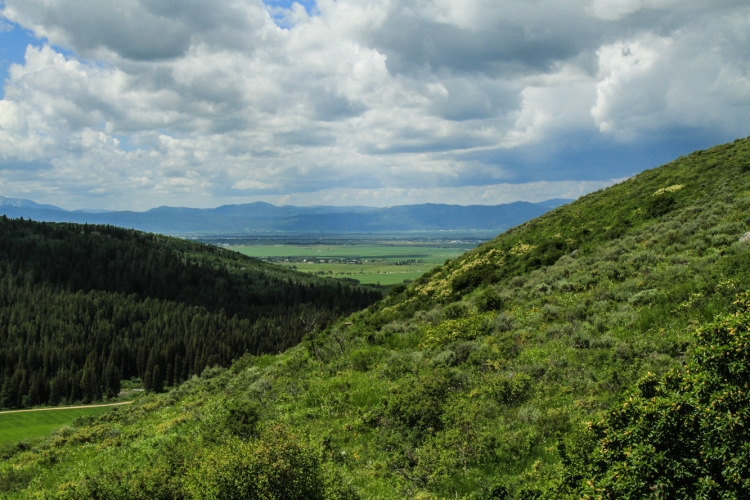 We did see the Idaho welcome sign and I had Shawn take a picture for me. This was the first time I had ever been to Idaho. It took about an hour over the mountain to get there.  There was not very much traffic and we didn’t have any  problems getting over the pass.  Victor was not too far away.  Just a few words about the town of Victor and its surroundings. Victor lies in Idaho’s Teton Valley which is usually sunny and warmer than Wyoming’s well-known neighbor. The Targhee National Forest and the Teton Range surround the valley.

What to do in Victor

We stopped in town to ask directions to the motel and discovered it was outside of the town.  It was called Teton Valley Motel. The hotel was located in a strange location.  The houses and various  buildings looked like they were randomly sitting in a field.  We took a road which led us to the hotel. I went to check in and the desk clerk was very nice.  He told me about the three restaurants in town which he said were all very good.  I asked if there was a grocery store and he said there was a small food mart but there was a big grocery store about 10 miles down the road in a town called Griggs. I asked him what there was to do and he mentioned that the  road leading up through the Teton mountains to the Targhee Ski Resort had some very nice views.

Our room was on the first level right next to the office.  We parked our car and carried in our luggage.  After settling in, we took the desk clerk’s suggestion and headed up the mountain toward the ski resort.

It didn’t take too long to get to the ski resort.  It was closed for the summer so we turned around and went back down the mountain.  Then we saw a road that said the name of Teton  Canyon so I decided it might be like a smaller version of the Grand Canyon.  We followed the paved road and then a dirt road for what seemed like miles.  The land was flat and we were driving that whole time through a forest.  We passed several camping areas and a Boy Scout camp. I think it was more than an hour.  Finally we got to the end of the road.  We saw two groups of young people getting ready to go on a hike.  I think one group was a young adult  conservationists group and the other was a Boy Scout troop.  I talked to the Boy Scout leader and he said that the canyon was where we were with the mountains on all sides.  I guess Shawn and I both thought that we would come to an overlook and see a canyon but instead we were in the canyon!  Shawn wanted to take some photos but it started to rain really hard.  He took a few pictures of a nearby stream and that was about it. Then we jumped into the car and what we thought was rain was really sleet coming down hard and fast.  It didn’t seem to take as long to get out and back to the main highway.

We returned to our hotel to rest but then thought we better make the trip  to Griggs to buy some food at the grocery store.   We found the store and it had a lot of food bars which I thought a bit strange.  We bought some take-out Chinese food and a few other things and went back to the hotel. As I was driving, I remembered we didn’t have any plates or forks and knives.  I drove to the food mart in Victor and the grocery clerk was very nice.  I told her we only needed two plates so she suggested I go to the deli and ask them for two paper plates.  They also had plastic knives and forks there for free and so with the plates we were all set to eat in that night.  The days have been so busy that by late afternoon we are just too tired to go out to eat.  I think if we ate out for every meal it would be more than a hundred dollars a day.  Every meal eaten in a restaurant has cost between $35 and $40.  We have been use to getting breakfast with our hotels but none of these mountain hotels offer breakfast.  We are looking forward to our last hotel in Western Yellowstone which does come with breakfast.

Looking over the photos on this page,  I realize they are all about mountains.  Hopefully, day 4 will be a bit more interesting – photo-wise.