While organizing our trip to the Grand Tetons and Yellowstone National Parks, we thought it would be a good idea to go on several tours.  Since I was the designated driver, I thought it would be nice to have a few opportunities to sit back and just concentrate on photography and seeing the sights.  This tour looked like the way to go especially since it was early morning and a good time to see the wildlife.

We didn’t realize that the wildlife part of the tour would start before we got into the jeep.  Shawn and I got up very early as we were more than an hour from Jackson Hole and had to meet the tour by 6:30 am.  It was still rather dark as we started out.  There are warnings everywhere about driving fast and being careful of wildlife.  Many areas have a 25 mph to cut down on the traffic noise as it affects the nearby wildlife.  Coming around a corner, I saw a deer or maybe an elk jumping into the brush. It is always exciting to see wild animals in their own habitat.  We arrived in Jackson Hole around 6am and looked for a restaurant that might be open, but no such luck!  We found the meeting place and parked our car.  Then Shawn said he was going to look around.  I was content to listen to the radio.  The next thing I know, Shawn was rushing into the car to grab his camera.  He had spotted a beaver walking around the parking lot.  The beaver kept trying to cross the street.  I grabbed my camera and started shooting.  Finally, a policeman showed up and then animal control.  The beaver was corralled and taken off the street.

Meanwhile, our jeep had arrived.  There was a a couple from Minnesota, an older guy from Kansas, and a mom and son from California.  The driver, whose name was Jack, was from Torrance, California. He offered us blueberry muffins, bananas and orange juice, and water.  So we finally had some breakfast!

It was a very cold morning about 48 degrees.  Shawn and I were dressed as warmly as we could be, but we were happy to find some blankets.  The sides of the jeep were open with plastic curtains that were rolled up or down in case of rain.  The guide, also the driver, was in a separate part while we were all in the back. It was absolutely freezing!  I had two jackets on and had to pull up both of the hoods I was wearing.

Along the Gros Ventre River

Our first stop was along the Gros Ventre River. Our guide had a really neat spotting scope that he used to search along the river for any wildlife. In just a little while, we saw a moose meandering along the river and finally crossing it.

I took quite a few photos of the moose.  We followed him for a while but he disappeared behind the bushes and trees.  I found a bluebird in a tree right where I was standing and was able to get a few good shots.

Flowers photographed on the wildlife tour

After this stop, we were headed toward Mormon  Row Historical District.  Along the way we saw many pronghorn (similar to antelopes but not related.) They are indigenous to western and central America. Their closest living relatives are giraffes.  They are the second fastest land animal in the world. We saw several groups but always in the distance and too far for my 300 lens.

We drove along a dirt road to get to Mormon Row.  The sun was shining on the mountains as the mist rolled across the valley. It was a beautiful setting and great photographic opportunities! 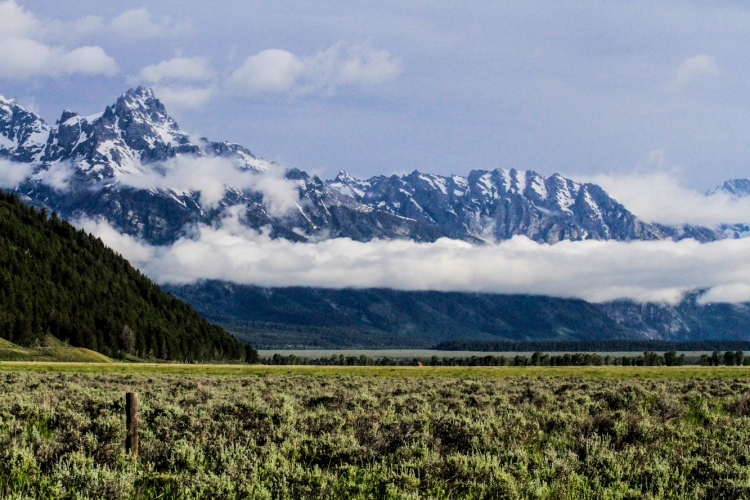 Here is some historical information about Mormon Row.  Mormon Row is a group of homesteads along the Jackson-Moran Road in the south east corner of the Grand Teton National Park. This was the first Mormon settlement  in this area. The farms, which included barns, fields and corrals, were built in the late 1800s.  Mormon Row was placed on the National Register of Historic Places in 1997.  The barn I photographed is often seen on books, maps and brochures advertising the Grand Teton National Park.

While we were standing near the first barn, we saw a mule deer in the field behind us.  He was very close and I took a lot of pictures. He was so cute! 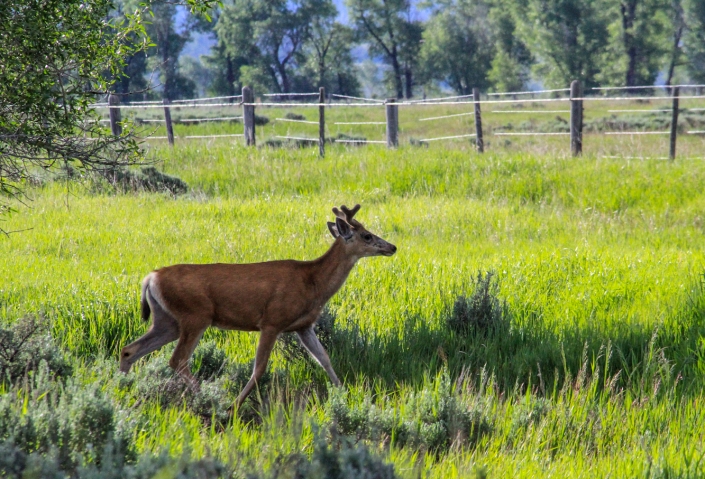 We went to a few other places on the tour.  In one out of the way field, we saw a lone pronghorn.  It never came close enough to take a decent photo.  The guide set up his spotting scope and we looked toward the mountains and were able to see an elk and a bear. We stayed around this field hoping to see more up close wildlife but nothing showed up.  The closest thing we had to wildlife was the little boy who was on the tour.  He continually crawled on top of the jeep, chased the pronghorn, and threw the food around.  His mom never batted an eye.

The guide brought out hot water in a thermos and we had coffee, hot chocolate, and tea.  He also gave us a variety of snacks – crackers, chips, pretzels etc. That was great as it was getting windier and colder.

The last place we went to was by the Snake River.  Unfortunately, we didn’t see anything close up but we did see a blue heron high up in a tree feeding her baby chicks through the spotting scope.

It was about 12pm when we returned to Jackson Hole.  Shawn and I thought we would do a bit of shopping and then have lunch.  We found an Asian-Fusion restaurant that was very good.  Shawn had an udon noodle soup and I had a vegetable curry over rice. After lunch, Shawn wanted to return to Mormon Row to take more pictures.  We had looked for the road when we were on our way back from Victor but never found it.  Now we knew where it was.  There were quite a few people by the buildings when we were there in the morning so we weren’t able to take all the photos that we wanted.   Day – 5 to be continued.