We finished our tour of Mammoth Hot Springs and headed toward the hotel area. I think everyone was looking forward to eating lunch and relaxing a bit. There weren’t a lot of choices – I think there were only two. We were dropped off at the hotel and told to meet the guide back in an hour.  A lot of us went to the grill. The line was practically out the door. I got in line and Shawn left and said he would be back.  I finally got to order and what I wanted was not available so I ordered soup.  I found some other people from the tour to eat with.  I never did see Shawn.  When I was finished, I went back to the hotel and wandered around. Finally, it was almost time to go and I still didn’t see Shawn.  Fortunately, he came running up just as the tour bus arrived.  He left his camera on the bus and was trying to find where it was parked so he could get it.  He never did find where the bus was parked. Across the street in front of one of the buildings there were about 4 elk munching on the grass and he wanted to take photos.  We got on the bus and saw the elk again. I took one photo out of the window.

The next part of the tour was a bit boring as we didn’t stop very much but the guide kept us awake with his stories and the air conditioning.

The next attraction on the tour was the Grand Canyon of Yellowstone.  We had already seen it on our first tour so were not that excited. I was surprised when we arrived at the parking area as it was different from the first  one.  That’s when I found out that there are three falls and three views. The first time we had been at the Upper Falls and now we were at the Lower Falls. 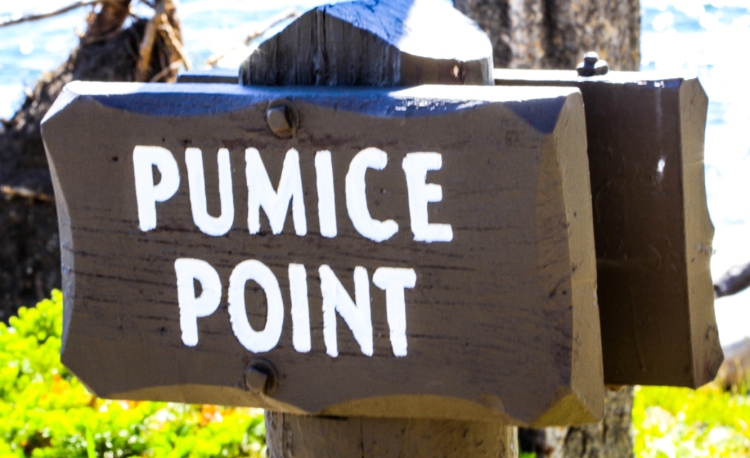 One of our last stops before heading back  was Pumice Point along the Yellowstone Lake.

We also made a short stop at Lake Yellowstone Hotel.  It was a beautiful hotel – very different from all the rest. There was a great view of the lake in front of the hotel. I had a chance to talk to some of the summer workers who were on tour with us.  One girl named Dana was very friendly.  She came  from the Ukraine and was in the states on a summer-work program. She mentioned she was  coming to San Diego in September so I gave her my name and number and said I would show her around.

It was about 7pm when we returned to the Old Faithful Inn.  We were worn out!  It was a good tour and we saw a lot but we were ready to go back to our hotel in West Yellowstone. It was about 30 miles and it would be another hour before we got back.

When we got back , I decided to do a little cooking.  We were now staying in another room in the same hotel except this time it was a basement room with a kitchen.  It was better than the first room we were in.  Not much in the way of  cooking utensils but I made do. I decided to make spaghetti with mushrooms and vegetables with a tomato sauce. We didn’t have any butter or oil to saute the mushrooms and veggies but it was still very good and nice to eat something home-made.  We had our last tour to Lamar Valley the next day but didn’t have to be at Canyon Village until 4:30.