A few facts about Serbia: Serbia is a country on southeast Europe’s Balkan peninsula and is mostly mountainous.  It has a population of more than 7 million. Serbia is one of the six republics that made up the country of Yugoslavia.  Belgrade is the capital and the largest city of Serbia as well as one of the oldest cities in Europe. Its most significant landmark is the Beogradska Tvrdava, an imposing fortress at the confluence of the Danube and Sava rivers.

Our river boat continued on its journey through the Iron Gate and on to Belgrade, Serbia.  That night Shawn and I were both awakened by very loud music and singing.  It was about 3:30 am, At first, we thought it was our neighbors but then realized the noise was coming from across the river.  We opened our curtains and saw a lot of lights and heard a lot of music.  We grabbed our cameras and took a few photos of the lights and their reflections on the river. We figured out that we must be close to Belgrade.  We went back to bed and woke up when our boat docked in Belgrade.

Our tour that morning was called Panoramic Belgrade.  Our guide was a young man who had a lot of fascinating stories and was very knowledgeable about the city and its history. Our first stop was a guided walk around the famed Kalemegdan Fortress. It is located on top of a high ridge and overlooks the Great War Island where the Sava River and the Danube meet and makes one of the most beautiful natural lookouts in Belgrade.

The morning we went on the tour was overcast and rather dreary.  We actually walked through the park area and saw people walking their dogs and a lot of stray dogs.  So many dogs that it reminded some people of a dog park.  When we drove in the afternoon to our next excursion, we went around the fortress on the road side and it really looked like there were a lot more buildings that we didn’t see.

We finished up our walking tour of the fortress and got back on the buses.  It looked like it was going to rain.  I did have my umbrella with me on the cruise but hadn’t brought it along.

Our next stop was the Church of Saint Sava – a Serbian Orthodox church.  It is one of the largest Orthodox churches in the world and ranks among the largest church buildings in the world.  The church is dedicated to Saint Sava, the founder of the Serbian Orthodox church. It dominates Belgrade’s cityscape.  Church construction began in 1935 and was halted off and on due to the war – 1941 bombing of Belgrade. In 1958, the Serbian Patriarch German11 renewed the idea of building the church and construction of the building began again in 1985.  Nato bombed Serbia in 1999 and so the building of the church was once more stopped. In 2001, the prime minister convinced the present Patriarch to continue working on the church and as of 2017, the exterior of the church was completed. Work on the interior of the building is yet to be completed.

Every day its grandiose bell towers with almost 50 bells announce when it is noon. Its sheer magnitude of the church can be visible from most any approach to the city. The central dome is 4,000 tons and its lifting was the greatest achievement of the construction process.  The lifting itself took 40 days!

We arrived at the church and the bus had to park some distance away, so we walked up toward the entrance.  It had started to drizzle and the guide was explaining the history of the church while we were standing in the rain.  It was a bit irritating as he wasn’t cognizant of us getting wet. Finally, we headed toward the entrance.  We only had a short time to look around and then we walked down the stairs to the lower level.  Shawn and I were a bit disappointed that we had so little time upstairs, as we wanted to look at the things they had for sale – Both Shawn and I have religious icon collections that we have gathered over the years from our travels.

The first level of the church is still being decorated and some parts are still being constructed.  We were taken to the lower level which was completed. It was amazing with gold as a central color – everything shiny and sparkling. Beautiful murals, paintings, and frescoes adorn the walls. 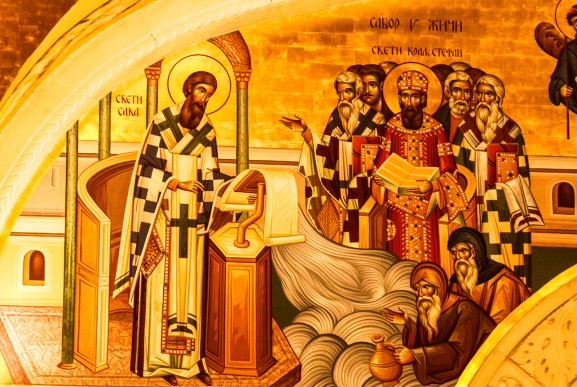 The Church of Saint Sava has an enormous importance in Serbian history and it is and has been a symbol of faith and freedom.  It represents an extraordinary place of worship for Serbia and its proud people.

It was raining a lot harder as we walked quickly back to the bus.  The bus wasn’t able to go the way it came as the police had blocked off the road.  Skillfully, he backed up the huge Viking Mercedes Benz bus until he could turn around and go a different way.  The guide said we were to have some free time and he was supposed to drop off at a park.  I asked if there was any cover and he said there wasn’t.  I think he changed his mind about the park and let us off downtown on the main street right in front of a very nice hotel.

Shawn and I opted to go in the hotel and find a restaurant.  There was one upstairs so we ordered hot chocolate.  Another Viking passenger joined us and we had a nice chat.  The gentleman was with his wife but she had trouble walking so he was on his own for the excursion.  The waiter was very kind and accommodating.  I asked him if I could get some Serbian coins for dollars.  He gave me a handful of Serbian coins and insisted I keep them as a gift.  I tried to collect some from each country I visited. Speaking of the local people we met on our trip, I have to say that most everyone was friendly and polite and never seemed to mind us taking photos.

It was still raining when we left.  I took the last photo of what the guides called socialist realism architecture on our way out of the city.