We were entertained by a regional  Croatian band in the Viking Aegir lounge.  They played folk and modern songs strumming on stringed instruments, including the tamburica which came to south-eastern Europe from Asia around the 15th century through Turkish conquests. It became a symbol of Croatian ethnic identity in the early 19th century. The gentleman without an instrument was their manager.  He had a good sense of humor and made everyone laugh. 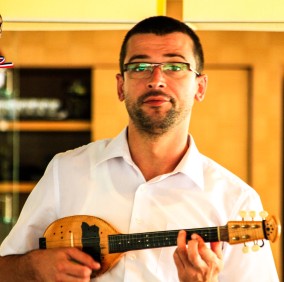 We passed through Vukovar on the way to meet a Croatian family. Vukovar has the largest river port in Croatia, located at the confluence of the Vuka River and the Danube. The city was heavily damaged during the Croatian War of Independence.  The damage to Vukovar has been called the worst in Europe since WW2. There are still houses riddled with bullet holes and damaged from the Croatian War which was fought from 1991 to 1995 between the Croats and Serb-controlled Yugoslav People’s Army.

We saw new houses being built and many of them were small box-like structures. We also saw homes still damaged from the war.  Our guide was a young man who did not have a lot of encouraging things to say about his country.  The lack of jobs and the problem of many young people leaving the country was central in his overview of Croatia.  He told several horror stories about what the Croatians had suffered at the hands of the Serbs. From what I have researched, Vukovar is still an area which continues to be overshadowed by the war.  The siege of 1991 destroyed its economy, culture, infrastructure, and civic harmony but it is slowly trying to recover and has made some progress during the last few years especially since entrance into the European Union.

We finally arrived in the area where we were to meet with our Croatian family.  We met Ester Gajnok Kolodvorska and her daughter.  Our guide had divided up the people on our bus so three different homes were visited.  When we entered the house we saw that the table was set with drinks and small cakes.  Rakija is the catch-all term for any kind of spirit distilled from fruit in Croatia.  It translates to “brandy”.  Many of the home-made varieties contain herbs and are used as a digestive aid and tonic. Ester had cherry brandy for us to drink.  I bought a small bottle to take home. 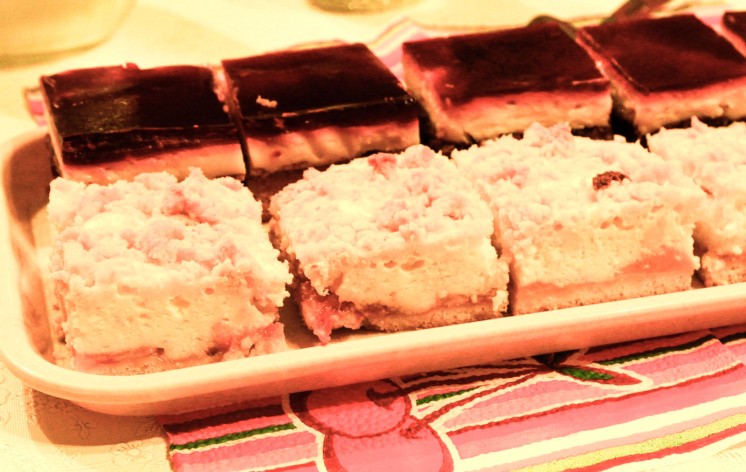 We had an enjoyable question/discussion.  Along with our guide, there was an interpreter. She was very helpful and was able to help us understand our hostess.  We completed our afternoon tea and then went out to see her garden.  I was surprised at how big her garden was and how many fruit trees that she had.  There were even pens for pigs but she didn’t have any now.  She lived by herself but her daughter and family were nearby. I imagine she had help with her garden as it was a huge area. Here are a few vegetables and fruit I photographed in her garden.

Our family encounter was over, so we headed toward the Osijek Citadel Complex for a walking tour.  The bus parked in a parking lot and we proceeded to walk toward the Rising of the Holy Cross Church, also known as St, Anthony.  It was located near the square in the old part of town called Tvrda.  Tvrda is the best preserved and largest ensemble of Baroque buildings in Croatia and consists of a Habsburg star fort built on the right bank of the River Drava. Tveda sustained significant damage during the Croatian War of Independence.  It is now on a tentative list as a nominee for a World Heritage Site. The fort interior is now the center of Osijek’s nightlife.  There are numerous bars and restaurants in Tvrd. 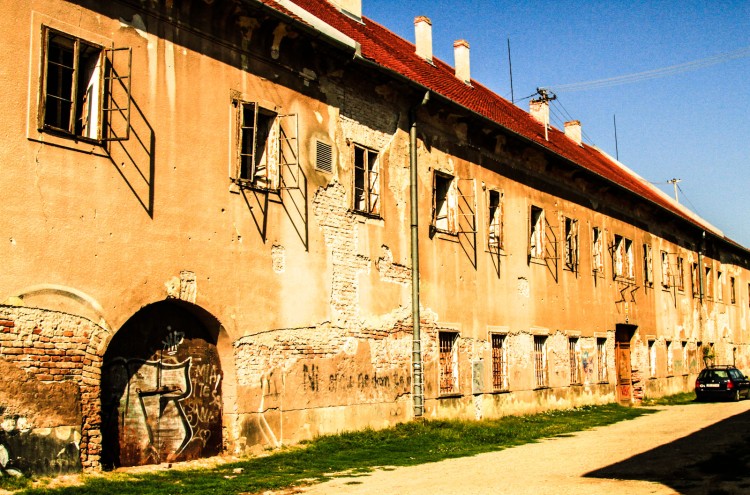 Rising of the Holy Cross Church

We finally arrived at the Rising of the Holy Cross Church.  Shawn and I sat in the back.  It was about 107 degrees outside and pretty warm inside the church. We were treated to a flute concert given by a young lady.

With the completion of the concert, we were ushered out into the courtyard behind the church. The monastery was visible from the courtyard as well as, several unusual architectural buildings.  An unusual statue of the crucified Jesus, made of the remains of bullets from the war was displayed in the center of the courtyard. There was also a shop of souvenirs and many second-hand goods including some antiques.

From the courtyard, our guide steered us toward the Holy Trinity Square.  It was extremely hot but still, everyone was eager to see the city’s central square lined with historic buildings, lively cafes and the famed votive pillar.

Inside the square, we could see the famed statue = centerpiece pillar, dedicated to those who lost their lives in the Great Plague and many other important landmarks.

I wish we had had more time at the square and in the surrounding area but excursion time was limited and I know the guide had to stick to a schedule.  It was very sunny so everyone was seeking some shade and most were happy to be heading back to the, hopefully, cool bus!