The evening before we arrived in Hungary, Shawn and I had another photo opportunity.  The moon on the Danube was electrifying and we took some fantastic photos.

Kalocsa is a Hungarian town situated on the left bank of the Danube. Once the seat of the archbishop, the cultural center of Kalocsa is more than 1,000 years old. One of the main attractions is the Holy Trinity Square where you can find the splendid cathedral and the Archbishop”s Palace.  Kalocsa is also known as Hungary’s Capital of Paprika and the history of the fiery red peppers is chronicled in the first Paprika Museum also found on the square.

The town of Kalocsa was only a short drive from where the boat was docked.  We walked to Assumption Cathedral which was near the square. We would be listening to a short organ concert.  Shawn and I sat in the back of the church and only took one or two photos as the guide said we weren’t allowed to take any, but he wouldn’t stop us if we did. The organist playing the organ were behind and above us, so we never actually saw him.  The music was excellent and it was nice to relax and enjoy the peaceful atmosphere. 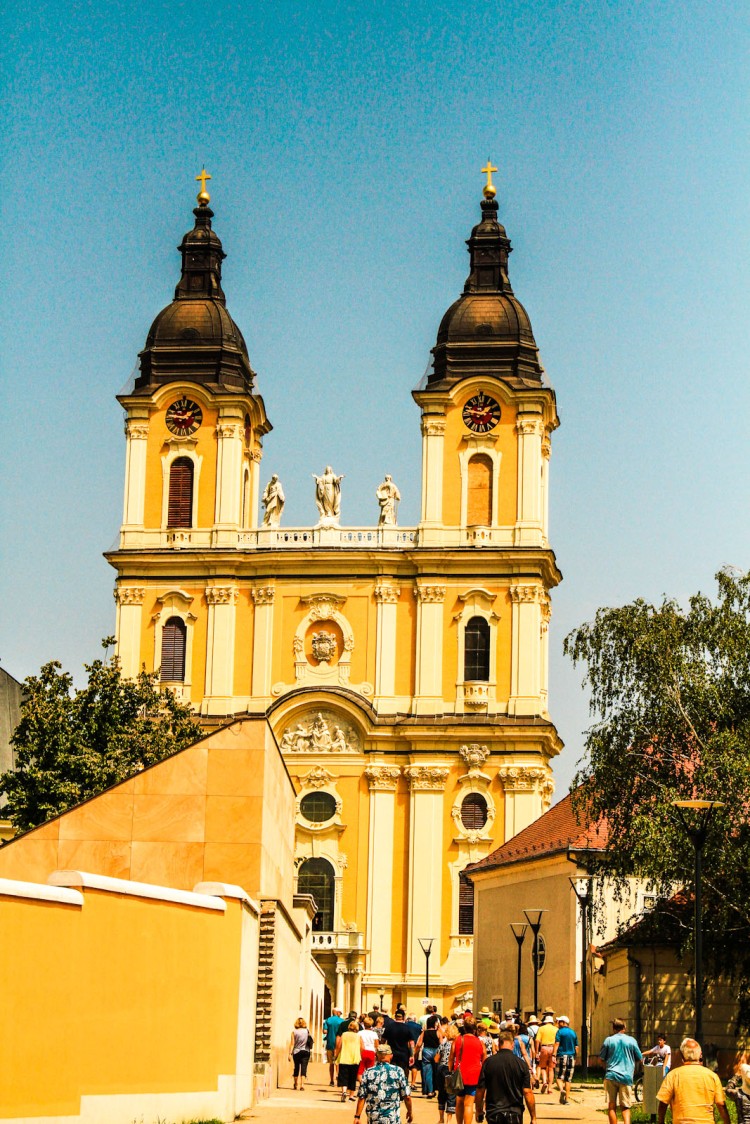 After the organ concert, we found our guide and we were led toward the town square.  There were so many tourists that we had to wait a while to walk back to the bus.  The guide stopped in the heat of the sun to talk to us about the history of the area.  I did notice that when we had men as guides, they were not always cognizant of our comfort. It was over 100 degrees and instead of heading for some shade, he stood in the full sun to talk. Shawn decided to go on his own and explore.  He saw the Paprika Museum on the corner so went over to look in the gift shop.  He bought some paprika, of course. I had bought some earlier in a small set-up shop near the dock. In the meantime, I stood with several others who had found some shade.  We had a speaker system, in that we each had a box and earpiece where the guide could talk and all of us could hear him. As long as you were not too far away, you could be tuned into all of his lectures wherever you wandered. Just when the guide decided that the crowd had thinned out and we were ready to leave, several people decided they had to use the restroom.  The closest one to us was in the Paprika Museum.  Three or four people went to find it and we waited some more until they all returned.

Unfortunately, we did not have time to visit the Paprika Museum or really get to see much of the town square or the Bishop’s Palace.

Puszta and the Bakodpuszta Equestrian Center

The vast Hungarian plain is called Puszta, a word meaning barren or empty.  Here the horse culture of the ancient Magyars, ancestors of today’s Hungarians, was honed and refined. This is one of Europe’s largest expanse of protected prairie, where Hungarian grey cattle, stud horses, Racka sheep with spiral-shaped horns graze on open pastures. The nearby National Park with over 200,000 acres has been a World Heritage site since 1999.  In this region, the sun shines more hours than in any other region of the country.

Horses and Cowboys have been part of Hungarian culture since Central Asian tribes arrived on horseback in the Middle Ages. Descendants settled on the Great Plain or Puszta of Hungary.  Fierce Hungarian cowboys or “csikos”  were employed to control vast herds of horses.  These 19th-century horsemen dressed in billowy bright blue garb and became romanticized heroes in folk songs, dances, and literature. Living outside year-round the csikos or cowboys became tough and very adept horsemen. They trained their horses to lie flat in the tall grasses and designed their saddles for quick getaways. The traditions of the Hungarian cowboy and their renowned horsemanship lives on in the rural plains of the Puszta and in the equestrian feats of the famed Puszta Horsemen.

As we drove up the dirt road to the equestrian center, we saw traditional dressed horsemen driving a wagon pulled by grey cattle.

As we entered the area, our guide said that the equestrian show would begin in about a half hour.  There were souvenir stalls and refreshments as well as animals to see in the stables and nearby pastures.  They were also giving wagon rides to the tourists after the show. I lost track of Shawn as he went on ahead and I was stuck in the restroom line.  By the time I walked around the building and found the stadium, I saw that the complete outdoor seating had been filled.  I stopped for some refreshments which were set up next to the seating. I grabbed a glass of white wine but bypassed the bread and lard (pork rendered fat, a traditional Hungarian snack food).  I looked for Shawn, but he was squashed between several people, so I opted for a seat high up and on the end.  I was glad I sat there because I could easily stand up to take photos. 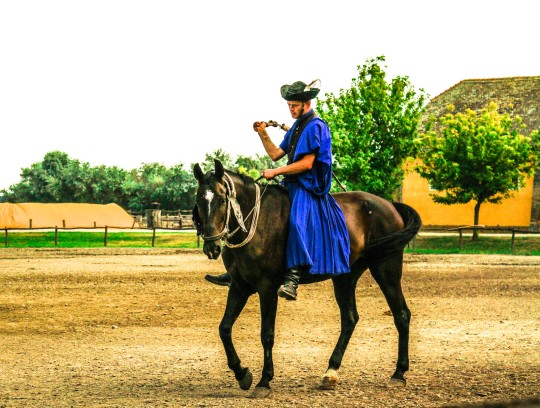 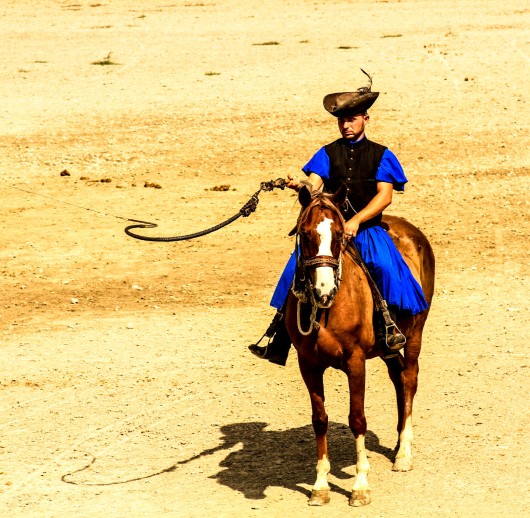 Many of the maneuvers and tricks we saw were those used in battles of long ago. You can see the total bond of trust between the skilled horsemen and their magnificent horses. 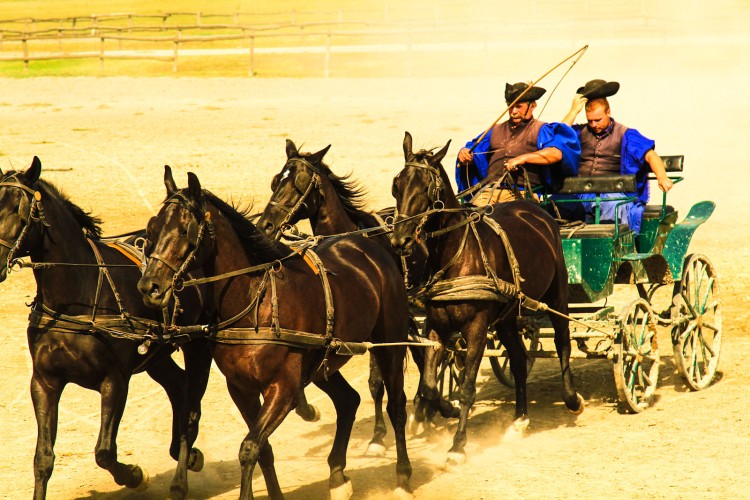 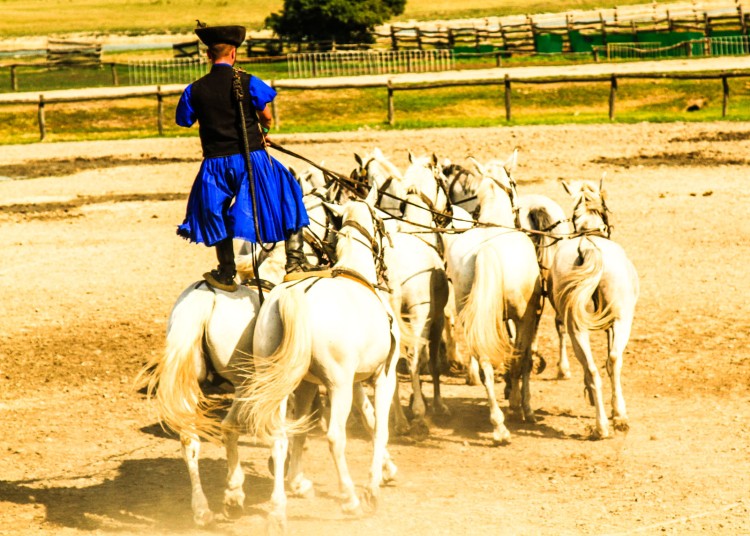 The end of the show came all too quickly.  I found Shawn and we decided to look around the stables and get some close-up shots of the horses.  We were also told that there were curly haired pigs and horned sheep. We found a few horses having lunch in their stalls,  one huge pig lying down by the stall door (no photo as he was lying against the stall entrance) and two horned sheep taking it easy.  We were a bit disappointed because we thought we would be seeing a lot more animals.  We went to a nearby pasture where there were quite a few horses and too many tourists.  We managed to get a few close-ups.  We went around to the front of the main outdoor building and saw several tables set up with all kinds of souvenirs.  It was fun to browse.  I think Shawn contemplated buying one of the whips that was featured in the show.

The following is a slideshow of some of the horses and what we saw in and around the Bakodpuszta Center.

It had been a very entertaining morning and we were impressed with the town of Kalocsa as well as the Bakodpuszta Equestrian Center with the adept and skillful  Hungarian Csikos (cowboys).

When we returned to the riverboat we were greeted by the crew with a special treat.  It was delicious and very welcome! 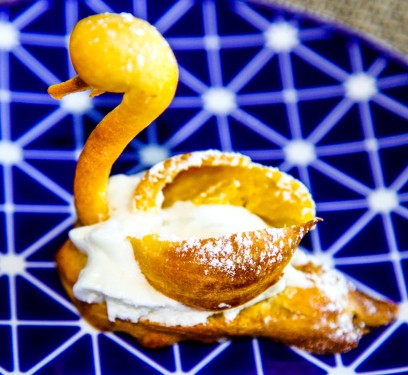