As we cruised into Budapest, it was both exciting and sad.  Our presence here meant our Viking cruise would soon be over.  We were already packed and our suitcases were outside our door.  We had been up very early and had our last breakfast on the Viking Riverboat.  As the riverboat made its way down the Danube and into the city, we were happy to be on deck to take photos of all we were seeing along the way.  It was a wonderful introduction to the capital city of Hungary.  Budapest is considered one of the most beautiful cities in Europe. With its scenic setting and its marvelous architecture, Budapest has earned the nickname of “Paris of the East”.

A little bit of history – the word Budapest is the result of a 1873 merger between two distinct cities: Buda on the western bank of the Danube and Pest (pronounce Pesht) on the opposite bank.  Although they have been populated for centuries, Pest and Buda have developed so separately that the first bridge spanning the Danube, the imposing Chain Bridge, wasn’t built until 1849. This distinctiveness continues to this day.

It was a bright sunny morning and the city took on a golden glow.  Probably our best photos of the city were taken from the Viking Riverboat deck.

The Chain Bridge, known as the Szechenyl Chain Bridge, is a suspension bridge that spans the Danube River between Buda and Pest.  It was designed by English engineer William Terney Clark and built by the Scottish engineer Adam Clark.  It was the first permanent bridge across the Danube in Hungary.  It was opened in 1849 and was regarded as one of the modern world’s engineering wonders.  It became a symbol of advancement and national awakening.  Linking both sides Buda and Pest, we drove across it several times during our excursions. 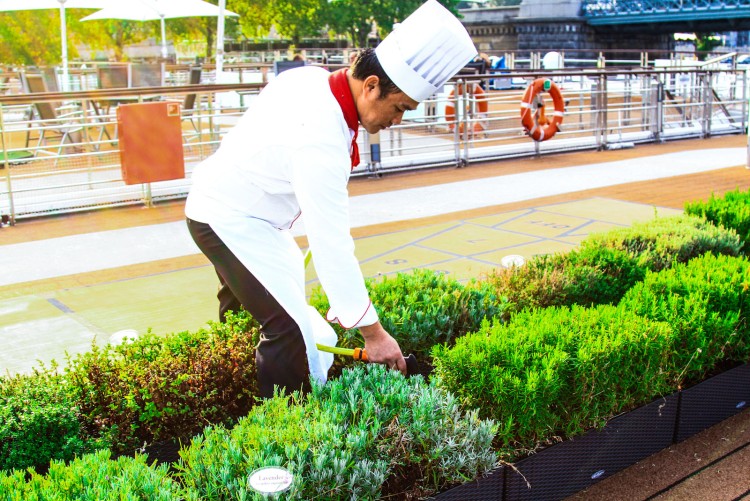 While Shawn and I were on the deck taking photos, we noticed a chef watering plants which surmised to be herbs.  I was surprised, as I hadn’t seen the flats of herbs before.  We were truly eating “local” food.

We said our goodbyes to several members of the staff and newly-made friends, and to the Viking Riverboat that had been our home for the past 8 days. We finished up our photo-taking and gathered our belongings and then headed for the footbridge and the excursion bus.

There were several Viking Riverboats all lined up.  In fact, we had to walk through a different Viking cruise boat to get to the footbridge.  Our excursion would be taking us on a Panoramic Budapest tour which would last about 4 hours and from there, we would be taken to our hotel – The Hilton Budapest City Hotel.