The excursion to Zalun was at 10:30 am. We woke up to the usual grey morning which included black clouds overhead.  Shawn and I were glad we had raincoats.  I had my water shoes as well and of course my umbrella.  The gangplank was short but it was extremely muddy on shore.  We walked a short way and discovered our tuk tuk.  There were five tuk tuks in all.  We scrambled into the first one, along with 2 others in our group plus the guide.

It was like sitting in the back of a truck. The bench-like seats were very narrow and we were each given a cushion that was bigger than the bench. As we came out onto the muddy road – the tuk tuk driver had a hard time navigating the huge muddy potholes. We slipped and slid practically off our seats.  I had to put my foot on the railing for leverage to keep from falling.  It was extremely bumpy.  Finally, after a difficult beginning, we got onto the main road.

I really didn’t take a lot of photos at this pagoda complex.  Sometimes there is so much to see that it is overwhelming to know what to take a photo of.

There were women and their children in groups on the floor. and many people praying.  I took a few people photos.  We asked permission and they never seem to mind. 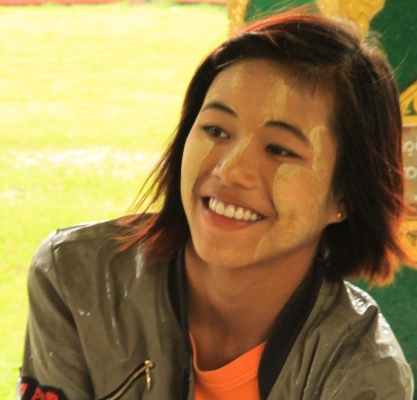 For some reason, I did not take the Buddha’s picture but it was here looking at the Buddha that our guide explained that women could only go to the bottom stations of the Buddha because they were considered “unclean” due to their monthly cycle.  This concept was not from the Buddha’s teachings but the idea of man and has been passed down through the ages and holds supreme even today.

Just as we were leaving the pagoda, it started to rain, not the usual downpour, but a heavy torrential rain.  We ran to get in the tuk tuk.  I didn’t have time to put my raincoat on and barely had time to get out my umbrella. The cushions were all wet but fairly dry after we turned them over.  Shawn and I sat next to each other.  We were both afraid of our cameras getting soaked.  I put my raincoat over them and my bag and they survived without damage.  Our pants were wet and it was a miserable ride back.  It was actually the only time we got caught in a rainstorm.

Sailing, sailing up the Irrawaddy River

The next two days we were just sailing, sailing.  The boat had a hard time keeping up with the schedule because it was sailing against the strong river current.  One day we had to stop close to shore because of the heavy rains. During the afternoon we were entertained by the guides showing us how to wear the traditional longyi that both the women and men wear here in Myanmar.  We also learned about the paste-like substance that all the women and children use on their faces.

The night before, all the passengers were given longyis as gifts.  Mine is the design you see here.  The men’s design is not as colorful as the women’s’ and many are ust a solid color.

It wasn’t too difficult to learn how to do it and it was fun watching everyone try to wrap it around themselves.

In addition, we learned about thanakha, the yellowish paste used by the women and children.  It comes from the bark of a tree called Limonia Accidissima. It protects the skin from sunburn and makes the skin feel cooler in hot weather. They put it on the face in different designs – mostly circular. It is a traditional cosmetic and completely herbal.  It also has a mild sandalwood fragrance.  It has been used by the Burmese women for over 2,000 years.  The guides demonstrated how to make the paste from a small piece of bark by grinding it on a stone slab.

After the demonstrations, we were a captured audience for the cruise director to give his lecture called”The Road to Freedom”.  It was a presentation of the history of Burma, the 2008 constitution and the capital city called Naypyidaw.  It was interesting and well-presented.   Mr. AB was very knowledgeable about the past and the present political situation in Myanmar. It was a different perspective than what we hear and read in the United States.

At the end of the lecture, we were treated to a ” back of the house” tour of the Sanctuary Ananda.  The tour was given by the director of the company who was sailing with us to Mandalay. We learned a lot about the running of the boat behind the scenes.  We visited the kitchen and saw how they prepared the food. Surprisingly, it is a very small area. The food has been delicious with always a lot of choices. Then we looked at the water purification system, crew’s quarters and lounge and finally, the bridge where the captain pilots the boat along with two government employees and a person called the River Master.  One side note is that all of the bridge occupants were barefoot. I learned another important fact the other day when I asked the cruise director to let me take photos of the executive suite.  He said that the boat’s interior is all made of teak wood and the most expensive part of the boat was its teakwood floors.  To take the boat out of Myanmar would cost millions in taxes on the teak wood alone.

The next day we set sail to Akauk Taung where we would see hundreds of Buddha images on the sides of the cliffs and also be treated to a cooking demonstration in the morning by the executive Chef Sumet.