Our boat had an early sailing so we had plenty of time to enjoy the scenery along the way.  We spent a lot of time on our balcony.  The beds faced the window so it was easy to see the sights.  Sometimes the river was very wide but other times it was so narrow that you could really get an idea of the river life and how important it was to the people. The people on shore and even in passing boats waved at us as we sailed by.  Here are some of the sights we saw as we sailed to Minhla. 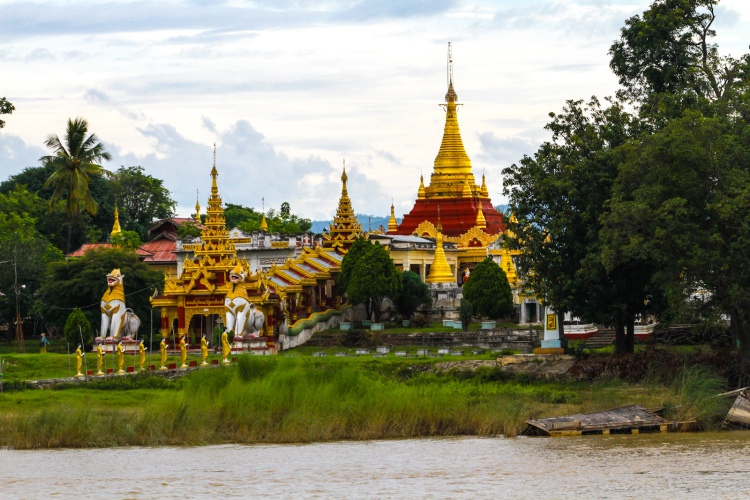 The changing colors of the sky were magical.  Many mornings it was cloudy and overcast but usually by late afternoon the sun would be peeking through.  The further north we traveled the less rain we seemed to encounter.  We had some beautiful days and evenings.

That evening after we had docked in Minhla, the dining room seats were organized in one long line.  Shawn and I sat with an English gentleman and his Thai partner.  We also had the director of the company who was aboard, sitting with us. He was originally from South Africa.  We had some interesting conversations.

The company presented us with several gifts.  The first was the longyi – the traditional garment worn by men and women. That evening we were presented with a small purse that had the same picture on it as the painting on our wall.

The third gift was the bamboo umbrella which had the name of the boat on it and was orange in color, and a final gift was a gold leaf which we could add to any Buddha statue for good luck. I kept mine as a souvenir.

The next morning Shawn and I had an early breakfast and were surprised when Thu Thu sat down with us.  She mentioned since the boat had the gangplank already up that we could leave early if we wanted to and then meet the group at our regular time outside.  Shawn and I quickly finished breakfast and got ready to go.  The Fort was just a walk away and it was fun to be out early on our own to check it out.

Take a look at the next post to see what we saw.