The Flower Festival in Medellin

Every August the city of Medellin hosts The Festival of Flowers.  It is the most important social event of the year. Thanks to its temperate climate, Colombia is one of the world’s biggest exporters of flowers and the festival which began in 1957 celebrates the city’s status as Colombia’s flower capital. The yearly event has grown into a 10-day festival with a diverse program of exhibitions, horse fair, free outdoor performances, and concerts as well as some unusual Colombian traditions – singing battles and bus parades. All of it culminates on the final day when the silleteros (flower vendors) parade their flowers through the city. Silla means chair and a silletero in the olden days was a peasant who would strap a chair to his back to transport goods, children and even people. The word was eventually applied to the flower vendors, who transported their goods to Medellin on their backs.

We made a visit to a local family and discovered that they have been participating in the Festival of Flowers for 35 years. We learned about the festival’s history and saw how the flowers are arranged and carried on their backs during the parade.

It was raining when we arrived and I rushed around taking pictures of flowers before the lady who was going to speak to us arrived. The abundance of flowers was overwhelming.  We sat and waited for the woman to arrive.  We found out that her name was Leopoldina and that she and her family work on the festival all year round.  Most of her family live close by.  Check out the photos of the flowers.

We listened to her explain the history of the festival and then she showed us how they made the displays.  The silletas (chair-like structure for carrying flowers on a person’s back) sometimes weigh as much as 170 pounds. The silleteros have to walk about 4 km in during the parade. 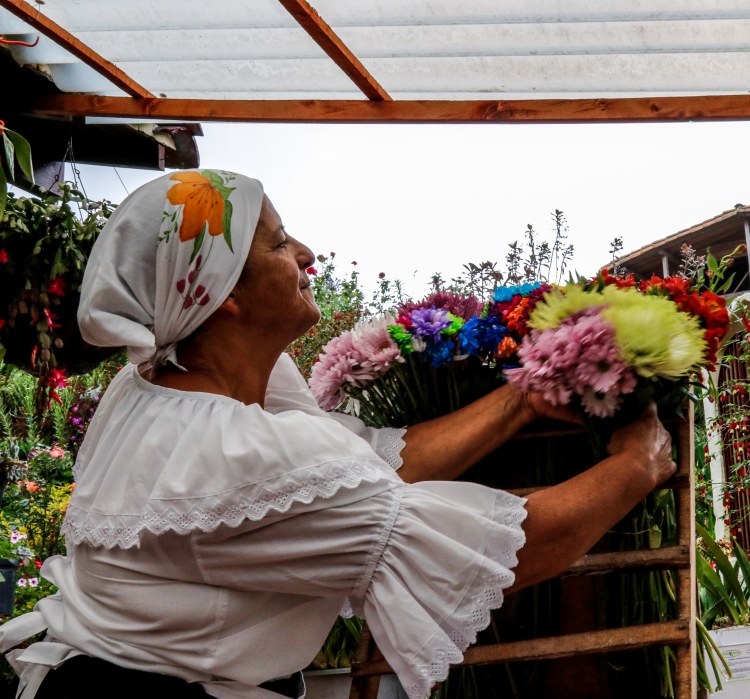 Leopoldina showed us all around outside and inside her house.  She had many ribbons and all kinds of awards that her family had won over the years.  She was such a sweet lady and you could tell she was really proud of her involvement in the Festival of Flowers!

Heading Down the Mountain

It was time for us to head into Medellin and check into our hotel. Our driver, Alex was quite a good driver, but Shawn was nervous because he didn’t seem to pay much attention to the road as he and Ana were busy sharing a bag of skittles. I took a few pictures along the way.  We were pretty tired as we had awakened at 5 am, flown to Medellin, toured around a farm, and finally, had a history lesson on the flower festival. In addition, we actually had dinner reservations that evening at a restaurant called the Herbario.  Alex was very kind and offered to drive us there and pick us up afterward. We finally arrived at our hotel and were very happy to have time to rest and recoup. It was a very nice hotel and our room was huge with two king beds and a sitting area.  The hotel gave us two drink coupons which we took advantage of later that afternoon.