We said goodby to Brookings and traveled up the coast to Florence. We had thought to stop there, but decided to keep going until we reached Eugene as we would be heading back down the coast the next week.  We picked up route 126 and headed inland toward Eugene.  Nothing much happened except we ran into a detour which took us about 30 minutes out of our way.

We finally arrived in Eugene and discovered a lot of one-way streets.  We parked near a coffee shop and I went in and asked the server for directions to the hotel.  It was a ten minute walk so we decided to go and see when our room would be available.  To our surprise, they said we could get in right away.  I checked in, and then Shawn and I went back to get the car. When we finally got into our room on the second level and opened up our curtains, we were surprised to look out upon a terrace filled with tables and chairs.  No one was sitting there, but it was weird because now we would have to keep our curtains closed day and night.  Later that night I peeked out, and sure enough, small groups of people were sitting there and of course, they could look right into our room. Since it was only for one night, I didn’t say anything to the desk clerk.  This hotel was probably our most expensive and it offered no breakfast plus to park you had to pay a valet fee of $18.00.

The hotel was in the middle of a lot of little shops and restaurants so we went to look for lunch.  We decided on the Drunken Fish as they had quite a bit of seafood on their menu.  I ordered fish tacos and Shawn had fish and chips  Mine was two tacos each with one little piece of fish with cole slaw and I was still hungry when I finished.  Shawn said his was ok, but we laughed about the chips which were tater-tots. It wasn’t cheap as it came to about $40.00.  I think we had already learned that eating out in Oregon was pretty expensive.

We wandered around some more and then saw an ice cream shop across the street.  It was time for dessert! I chose caramel with chocolate chunks and Shawn had banana.  The ice cream was delicious and filling. We went back to our room and called it a day.  We had gotten up at 4:30 AM that morning so we were very tired.

We got up early, checked out of the hotel by phone and were on our way to Forest Grove to visit my sister and her husband.  On the way, we stopped in Wilsonville  to have breakfast at the Black Bear Diner.  The portions were so huge, we could only eat half. No longer hungry, we continued on our way to Forest Grove. I didn’t see the sign, “Welcome to Forest Grove” so I just kept driving and finally decided I needed to ask some one where Forest Grove was.  I stopped in front of a beauty shop and asked the person working there. We were happy to discover that we were already in Forest Grove and that we had passed our hotel a few blocks back.  We backtracked to the hotel and checked to see what time we could get in and they said about 2pm.  From there, we went to see my sister, her husband and two cats.  They were happy to see that we had made it. We had a very nice visit and then later my sister, Alana came to see us at our hotel.  Before we went back to the hotel, we stopped at a  grocery store to pick up some ready-made food to eat for dinner at the hotel.

One interesting thing happened.  We had decided not to stay three nights, just two.  Unfortunately, there was no refund for the night we didn’t stay.  I explained to the girl at the desk and she said she would see if we could get a refund.  The following day she told me that she had worked on it all day and finally was able to refund my money for the one night. I will be sure to mention her name in my review of the hotel.

The next morning we got up early to travel to Astoria, a port city located on the south shore of the Columbian River, and where the river flows into the Pacific Ocean.  It is also the oldest settlement West of the Rockies.  The city was founded in 1811 by John Jacob Astor.  Europeans, especially Scandinavians  arrived in the 1900s and became a major part of the fishing industry and Astoria’s culture. With its diverse ship traffic, Victorian homes and a history built on the fishing industry,  Astoria continues to reinvent itself. A major focal point is the  Astoria-Megler Bridge which is a 4.1 mile bridge connecting to neighboring Washington state across the river.

Looking for breakfast, we stopped at the Pig ‘N Pancake.  They are a chain of breakfast places that we have seen in many of the towns along the coast. We got directions to the Cannery Pier Hotel and thought we would leave our car parked at the restaurant and walk along the boardwalk to see the CanneryPier Hotel.  It is located where the first canneries were built

We headed over toward the Cannery Hotel and Spa walking along the pier.  You could see some of the original pilings from the Union Fish Cannery which was built in 1903. 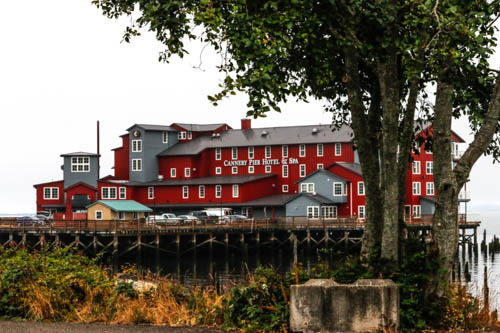 After our walk around the pier, we returned to our car and started looking for the Astoria Column.We saw lots of unusual Victorian homes and after driving up and down the steep hills, we finally came upon a sign that led us to the Column high on Coxcomb Hill.

The Astoria Column built in 1925 is surrounded by the history of Oregon – a 500-foot mural  is painted  around the tall structure.  Over the years several restoration efforts have taken place, the most recent being a one million restoration in 1995. Climbing the Column involves climbing up 164 steps in a circular staircase.  Shawn climbed to the top, but unfortunately all he saw was a blanket of white. The Column salutes Astoria’s explorers and early settlers  for their role in the United States stretch to the Pacific.

Wreck of the Peter Iredale

The Peter Iredale was a four masted barque sailing vessel that ran ashore October 25, 1906 on the Oregon Coast en route to the Columbian River.  No one was able to remove the boat so it remained there.  Over the last 101 years it has slowly deteriorated

We had a successful visit to Astoria.  Shawn was happy that he had seen everything on his list. It was still early so we decided to leave Astoria and go back to Forest Grove.  Alana had prepared a lovely pasta/shrimp dinner and delicious salad. It was a welcome treat after eating all our meals out. We were leaving for Cannon Beach early the next morning so we said goodby to my sister and her husband and returned to the hotel.

Next post : Cannon Beach and down the Oregon Coast.