We woke up early, packed the car and were on our way back to Crescent City.  It was, of course an overcast morning, but we were happy to be on the road early and missing the big truck and tourist traffic. It was a nondescript few hours and we made good time.  We arrived at our hotel and hoped we could get in early, but no such luck.  We decided to go eat breakfast and asked the desk clerk where to find a good restaurant. He suggested the “Chart Room” down on the waterfront and that it was open for breakfast. We jumped in the car and made our way to the waterfront.  It was a casual looking restaurant right next to the water.  You could see sea lions near by and quite a few sea birds.  We enjoyed our breakfast and it was good to relax after a long drive.  We decided to leave and look around to take some photos of the birds and sea lions.  Something else caught our eye as soon as we walked out.  There was an SUV filled with dogs. I think they were goldendoodle dogs.  When you see the photos you will understand how amazing they were! 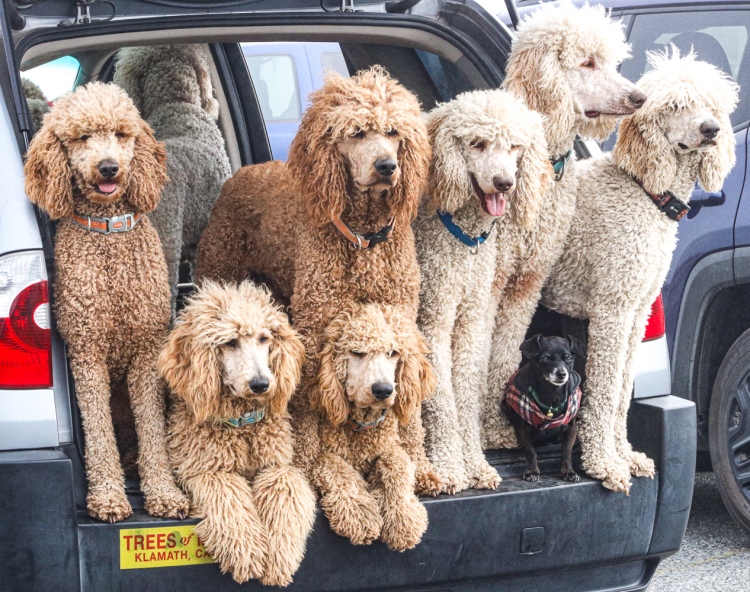 The sea lions were quite a ways from the area where we parked, but I did get a few pictures.

After taking photos, we drove back to the hotel hoping we would be able to get into our room, but to our dismay we still had to wait.  We sat around the hotel for a while and then Shawn suggested we go through the nearby Redwood Forest.

We looked up the forest on our maps and discovered it was about 9 miles east of the city off route 199. We found the entrance quite easily and made our way inside the forest.  Here is some information about the Jedediah Smith Redwood Forest: The Jedediah Smith Redwood Forest is a part of California’s Redwoods National Park system. This area has been named a World Heritage Site and International Biosphere Preserve. The park was named after Jedediah Smith, a 19th-century explorer and frontiersman. The redwood trees are about 500 to 700 years old and are of a stupendous size. The Jedediah Smith Park is one of the most unspoiled redwood parks.

It was midmorning when we started through the forest and the unpaved road was very narrow and a bit scary, especially if you had to pass another car.  In the beginning, we only saw one other car and so we stopped several times in the middle of the road to take photos.  There were no signs and nothing to tell us anything, just the dirt road which we hoped would eventually lead us out.  After some time of precarious driving, we did see hikers and more cars and we figured there was eventually a way out. It was another 20 minutes and finally we exited the forest.  Both Shawn and I had been to Sequoia National Park and there had been signs and information along the roads so I guess we expected to see the same kind of thing here, but there was nothing but a dirt road leading through the forest with tremendous redwood trees lining the way.  Some parts were very dark with little sunlight while other parts were more open with the sun streaming in.  It was quite an otherworldly landscape of monster trees!

These are the last photos I took.

After finding our way back to the hotel, we made arrangements to be picked up the next morning around 5 am. and taken to the airport.  Our flight was suppose to leave at 7am.  After eating lunch, we took our car back to the rental office at the airport.  There was nobody there, so we just left the car in the parking lot where we picked it up and then went into the airport and left the keys on the company desk.  We found out later we were suppose to turn it in some place else, but nothing was said to us.  We only saw  two people in the airport and they looked like they were leaving as we walked it.  There were no taxis and when I tried to call, there was no phone connection.  Finally, we walked over to an office we saw and talked to the man in there and they let us use their office phone.  We actually called the same people who were taking us to the airport the next morning.  A half hour later, we were in the taxi on the way back to the hotel.  That night we ate at the hotel restaurant (not great) and then went to pack.  I think both of us were ready to go home! The taxi came on time and we were dropped off at the airport.  Just as we arrived, we were told there was a fog delay which continued until 12 noon. Finally our plane arrived and we were on our way. After a plane change in Oakland, we were happy to be getting off the plane in San Diego!

All in all it was an interesting trip and we enjoyed seeing the beautiful Oregon coast. Shawn had written notes from a photography travel book about the Oregon Coast and that was our basic guide except for our side trips to Eugene and Forest Grove.  The good part was the fantastic scenery and that the majority of people we met were friendly and nice,  most of the hotels were good and the accommodations were comfortable and we had a chance to visit my sister and her husband in Forest Grove. The downside was how cold it was on the beaches and that the fog rolled in most every morning which made it difficult to take photos. Hopefully, our trip will inspire you to travel the Oregon coast and see the amazing sights for yourself!

Look for our next trip to Oaxaca, Mexico at the end of June.