Oaxaca (wah – hah – kah)  has been a UNESCO World Heritage Site since 1987.  The actual name of the city is Oaxaca de Juarez, named in honor of the former Zapotecan president of Mexico (1858-1872), Don Benito Juarez. The city was founded in 1529 by the indigenous Zapotec culture.  Oaxaca is famous for its cuisine and is often known as  “The Land of the Seven Moles”.  What is a mole you might ask? Mole is considered one of the most important dishes in Mexican cuisine and in short, is a type of sauce. There isn’t just one mole, but many varieties in a rainbow of colors from red and green to yellow and brown and even black. Oaxaca is also known for its handicrafts.  The city is surrounded by towns and villages that each specialize in their own artisan heritage.  Oaxaca is a cultural treasure trove with beautiful views, lively festivals, historical buildings, and spectacular archeological sites as well as exceptional cuisine and some of the most famous folk art crafts in all of Mexico. Finally, “Travel and Leisure Magazine” chose Oaxaca as the number one city in the world to visit!

We woke up early ready to begin learning about Oaxaca City.  We had previously signed up to take the Oaxaca Free Walking Tour and we were to meet the group across from the Teatro Macedonia Alcala.  Using our trusty GPS cell phone, we walked to the area and saw that some people had already arrived and were waiting.  Since we had some time, we took a walk up the street to take a look at the shops. I was fascinated with the black tanks on the top of many houses and buildings and found out that they are rooftop water tanks and painted black because the black color minimizes the growth of algae. You will see them in some of the pictures.  The number of people was increasing and it was time for the tour to begin.  The tour guide was walking around talking to everyone and was saying that her partner was held up in traffic and so we had to wait another half hour. Finally, she gathered us together and said her partner wasn’t coming so she would take all of us.  She then had us introduce ourselves and where we were from.  It was an amazingly diverse group – Austria, Germany, United States, Great Britain, and Ireland were some of the countries represented.  The group was quite large.  I think we started out with about 30 people, but I noticed as time went on the group dwindled down.  The tour guide was very knowledgeable, but so much of her lectures were about Mexican history and not so much about what we were seeing in Oaxaca City.  It was difficult taking pictures and listening to lectures, but we went to some very interesting areas and enjoyed taking photos of what we saw. The Xochimilco Aqueduct area was the most fascinating. 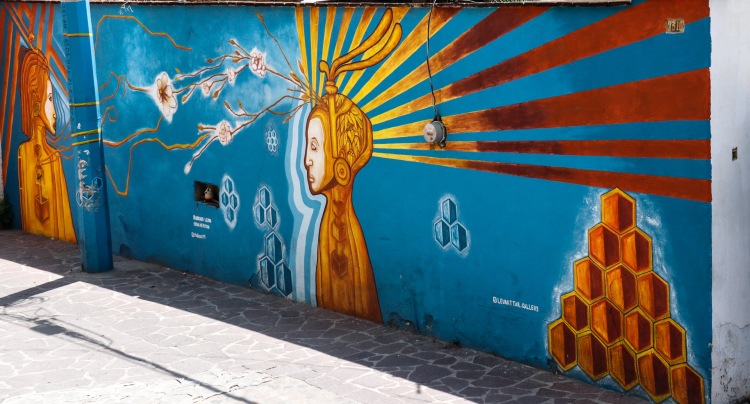 As we were in the middle of the downtown area, we decided to eat lunch at a restaurant called Los Danzaints which was nearby. Before we came to Oaxaca, Shawn had looked up the 10 best restaurants in Oaxaca and this was on our list. It was an excellent choice as we were seated on a spectacularly designed patio that embodied the Mexican culture.  The service was excellent and the waiter explained each dish.

The restaurant has some very unique dishes which we didn’t try – such as sample dishes featuring ant larvae, agave worms, grasshoppers, and flying ants! YUM!

We walked back to our hotel which was quite a long walk, but it was fun looking in the little shops and people-watching.  Crossing the streets seemed rather haphazard, but we got used to it. The locals just walked in between the cars and trucks whenever they needed to cross the street.

It had been a long day and we decided to stay in our hotel for the evening.  We had some snacks that I had brought from home and said good night.

Learn all about the making of mezcal in my next post and our tour outside the city to several small family-run distilleries.